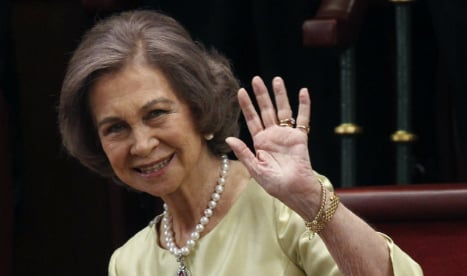 The head of Spain’s Centre of Investigation into Neurological Diseases (CIEN) confirmed on Monday that the Spanish royal had been put forward for the Nobel Peace Prize for her “commitment to Alzheimer’s research” as well as for her work with the handicapped and other marginalized groups.

Jesús Ávila revealed the nomination on September 21st – World Alzheimer’s Day – adding that Queen Sofia is “well-known” in the field of Alzheimer’s research for her work and for often appearing at conferences on the disease.

Alzheimer’s Disease accounts for 60 to 70 percent of cases of dementia and the causes of the disease are still not well understood.

Ávila confirmed that Queen Sofia – the wife of Spain’s former King Juan Carlos – had been nominated for the award by “a university in the south of the United States”, but did not reveal the specific institution, according to Spanish news agency Efe.

He was speaking during a press conference for the International Congress of Research and Innovation into Neurodegenerative Diseases, which is being held in Malaga on September 23rd and 24th.

The conference will bring together over 150 researchers to discuss the latest breakthroughs into treating the disease, which affects an estimated 35 million people worldwide.

One of the foundation’s main projects has been Project Alzheimer’s; an initiative whose work is carried out chiefly by the Queen Sofia Foundation’s Alzheimer’s Centre, which was opened in 2007.

The centre has space to house 156 residents suffering from Alzheimer’s disease, as well 40 day patients and a training centre.

Research is also a large component of Project Alzheimer’s. So far 27 research projects into the disease have been carried out, six of which have been on an international level, producing 60 scientific publications about the disease.

Only qualified people are allowed to nominate candidates for the Nobel Peace Prize – including members of national assemblies and governments; university professors in certain subjects such as history; and former recipients.

The nominations are considered by the Nobel Committee, which draws up a shortlist, from which the eventual winner is chosen.

The Committee is supposed to keep information about nominations secret and will only release details 50 years after the prize is awarded.

This year, the Nobel Peace Prize winner will be announced in Oslo, Norway on Friday October 9th and the prize will be awarded in a ceremony attended by the King of Norway on December 10th.