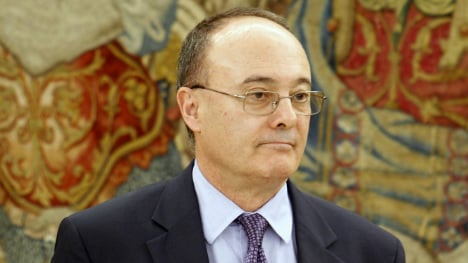 Bank of Spain governor Luis Linde said Catalonia would drop out of the eurozone if it broke away from Spain and would lose access to credit from the European Central Bank.

He followed European leaders, businesses and big commercial banks in warning of the financial risks of secession for the rich but heavily indebted northeastern region.

Nationalist leaders in Catalonia have vowed to declare independence within 18 months if they win the vote on September 27th.

“Leaving the European Union means automatically leaving the eurozone,” so banks in Catalonia would “stop having access to the ECB's facilities”, he told reporters.

He said there was a risk, albeit a “highly unlikely” one, that Catalonia would end up having to impose banking restrictions as Greece did in June at the height of its debt crisis.

The latest opinion polls show separatist parties could win a majority in the Catalan regional parliament on September 27th.

The independence drive has intensified over the recent years of economic crisis. Catalans complain about how much of their tax money is redistributed to the rest of Spain.

Their vows to secede have posed a tough political challenge to the conservative central Spanish government. It is looking to strengthen Spain's economic recovery and preparing to fight a general election in December.

Major Spanish and European banks warned on Friday that Catalonia would put “financial stability” at risk if it separated from Spain and the EU, potentially driving them to abandon the region.