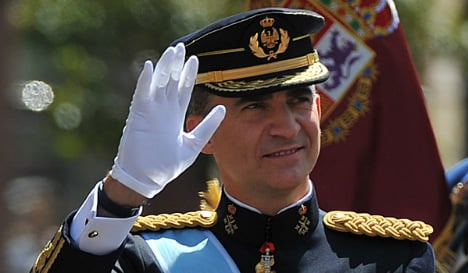 A journalist has caused a stir after being a bit too informal with Spain's King Felipe. Photo: Rafa Rivas/AFP

An important rule of etiquette in the Spanish language is to always use the formal form to show respect – especially when talking to the King.

But proper Spanish etiquette seemingly slipped the mind of one TV reporter while she was interviewing King Felipe VI about the EuroBasket game on Sunday, where Spain beat Lithuania 80-63 to take home the gold.

The Telecinco reporter was asking the King about how he had adjusted his schedule to cheer the basketball players on to their win, but referred to him throughout by using the informal tu tense.

“You [informal] were with the players after the game, during the preparation phase, when they were playing in Madrid. You [informal] promised that if they were in the final, you [informal] would adjust your schedule to be with them,”  reporter María Victoria Albertos said to the King.

It wasn’t until the end of the question when she corrected herself.

The King himself did not seem taken aback by Albertos' informality, and answered her questions with a smile.

The reporter's momentary lapse in decorum did not go unnoticed on social media. Soon Twitter was flooded with comments from viewers, some not so pleased with the way Albertos addressed King Felipe.

“Where did Telecinco get this common woman who uses the informal tense with the King?”

“I am fed up with the informal tense in this country. Now it has happened to the King. The other day to my 87-year-old mother. Respect, I only ask for respect.”

But others seemed to think the situation had been overblown.

“Those who are indignant about the informal you with the king can return to the 16th century, please.”

“The Telecinco reporter called the King 'tu' because there the real king is Pau,” said another user, referring to the Spanish team's forward, Pau Gasol.

Others had fun pointing out that the King's wife, Queen Letizia, was herself a journalist.

“The last journalist to call the King 'tu' ended up married to him.”

According to El Mundo and El Confidencial, Princess Elena, 57, and Princess Cristina, 55, got the inoculations in February while visiting their father, ex-king Juan Carlos, in Abu Dhabi.

The two royals would not yet qualify for the jab under Spain’s Covid-19 immunisation programme, which gives priority to older people and the most vulnerable.

Juan Carlos, who abdicated in 2014, moved to the United Arab Emirates (UAE) in August amid growing questions over his financial dealings.

A spokesman for the royal palace refused to comment on the reports on the grounds that the princesses are formally “not part” of the institution and the palace has no say in their activities.

“The vaccination of the princesses is more news which contributes to discrediting the monarchy. For the public, this constitutes preferential treatment and privileges,” Equality Minister Irene Montero, a member of Podemos, told public television TVE.

The monarchy is one of several issues which dividing Podemos and the Socialists, which have governed since January 2020.

It is the first time that an anti-monarchy party has been in power since Spain returned to democracy in the 1970s.

The controversy over the vaccinations comes less than a week after Juan Carlos settled a debt of nearly 4.4 million euros ($5.3 million) with the

Spanish tax authorities in a bid to avoid a potential lawsuit. The back-taxes were due on the previously undeclared value of private jet flights — worth eight million euros, according to press reports — paid by a foundation based in Liechtenstein belonging to a distant cousin of Juan Carlos.

The payment caused outrage in Spain, with Sanchez saying he shared the “rejection” which the “majority” of Spaniards feel towards what he called Juan Carlos’ “uncivic behaviour”.

ng a visit to Juan Carlos, according to Spanish media reports.

Spain’s chief of defence staff resigned in January after it was revealed that he got the coronavirus jab in Spain despite not being on a priority list.