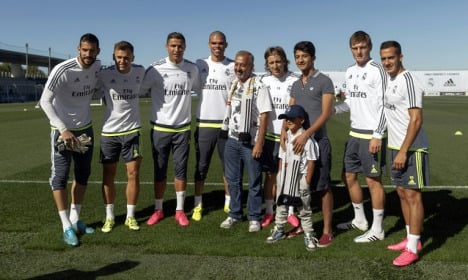 Osama Abdul Mohsen and his two sons Mohammad, 18, and Zaid, seven, have been brought to Spain due to the initiative of Miguel Angel Galan, the director of a football coaching school in the Getafe suburb of Madrid.

“Little Zaid got to know his idol, Cristiano Ronaldo, with whom he was photographed on the pitch,” the club said in a statement alongside a picture of the family with the World Player of the Year and a host of his Madrid teammates.

“The father of the Syrian family, who was tripped by a Hungarian journalist, and his sons met (coach) Rafael Benitez, the technical staff and the squad minutes before the final training session ahead of the game against Granada.”

Mohsen is a former coach of Syrian first division side Al-Fotuwa and has been offered a job at the CENAFE coaches’ training school run by Galan.

The family had already been given a tour of the club’s Santiago Bernabeu stadium on Thursday by club president Florentino Perez.

And they will also be present at the Bernabeu as guests of the club for the La Liga clash with Granada on Saturday.

On September 9 camerawoman Petra Laszlo was filmed tripping Osama as he fled with Zaid in his arms near the Hungarian border with Serbia.

She was fired from the television channel she worked for and apologised for the incident, saying she had “panicked”.