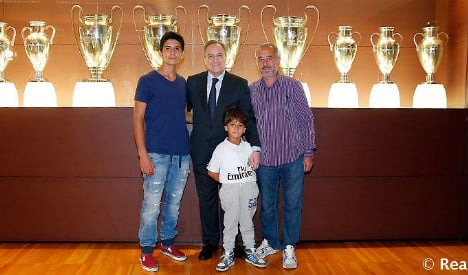 The father and two sons were invited to the Santiago Bernabéu. Photo: Real Madrid

But on Thursday, less than 24 hours after arriving in Spain, Osama Abdul Mohsen, 52, and his two sons were guests of honour at the Santiago Bernabéu, hosted by club president  Florentino Pérez himself.

“It's a dream come true. I love Real Madrid, they're my favourite team and my whole family's too,” said Mohsen, “I'm very grateful for the welcome given to us by the president. In Syria we dreamed of seeing a Real Madrid match, and now that's going to come true. I'm really happy”.

Here is how Uosama, Zied and Mohammad, symbols of the Syrian refugee crisis, fulfilled their Madridista dream. ;https://t.co/i8x2nGJxs6

The father and sons Mohammad, 18, and Zaid, seven, arrived in Madrid late on Wednesday after Mohsen was offered a job by the CENAFE coaches' training school in the suburb of Getafe.

A former first division football trainer in Syria, he became a symbol of the refugee crisis when on September 9th, camerawoman Petra Laszlo was filmed tripping him as he fled with Zaid in his arms near the Hungarian border with Serbia.

Laszlo was fired from her job and later apologised, saying she “panicked”.

At the Bernabéu on Thursday the three were shown the impressive trophy room by Pérez, who invited them to Madrid's forthcoming home fixture against Granada and presented them each with a scarf and a cap.

Zaid posed for photographs alongside the locker belonging to his idol, Cristiano Ronaldo before walking out on pitch and taking a shot at goal.

The family have been given a home in Getafe.  “Our first day in Madrid is very fantastic. I am very, very happy. Thank you,” Mohsen told reporters on Thursday outside the apartment where he is being lodged in southern Madrid.

On arriving in the city late the previous night by train he said: “Thank you, Spain. I love Madrid, I love Spain. This is very important for my life.”

The president of the training school Conrado Galan called the incident at the border “a blessed
trip-up”.

“We are a national coaching school so we decided to help a fellow coach,” he said adding that the organization aimed to bring over Mohsen's wife and two other children, who were reported to be in a refugee camp in Turkey.

“We are going to try and find them,” a spokesman for CENAFE chief told reporters.”The story is not finished. We are halfway towards granting them total happiness.”

Conrado Galan said Mohsen was the “ideal candidate” to teach in the coaching school.

“He can train coaches who will have to go to Dubai, Qatar and Egypt” where Spanish trainers are in demand, he said.

El Mundo said Mohsen left Syria a year ago and spent time in Turkey before moving on this month with Zaid.

The mayor of Getafe, Sara Hernandez, said Zaid would soon be able to go to school once his father receives his official asylum seeker's card.

She called on the government to speed up processing of refugees.

“We are suffering bureaucratic delays in processing applications for refugee status,” she said.

“High-profile cases like this serve to draw attention to the situation in our cities.”

A note on spelling: Real Madrid spells the names Uosama Alabed Almohsen and his sons Zied and Mohammad, while the names appear in various other forms throughout the media. The Local has chosen  to use the more common representation of Osama Ahmed Mohsen, Zaid and Mohammad.