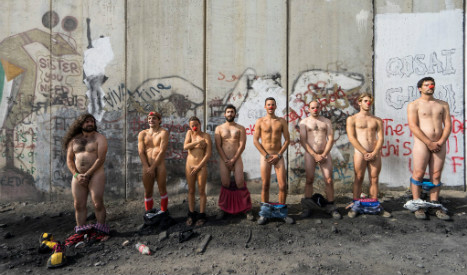 The Spanish clowning group's protest has not gone down well with Palestinians. Photo: Pallasos en Rebeldía/Facebook

A photograph of the group, Pallasos en Rebeldía (Clowns in Rebellion) who are stark naked except for a clown nose and covering their modesty with their hands, has caused an uproar in Palestine.

The group posted the photographs online on Wednesday in front of the West Bank separation barrier in Jerusalem. What was intended as a message of support to the Palestinian community has been met with a backlash from Palestinians, who have slammed the Spanish group’s “disgusting solidarity”

But members of Palestine’s conservative community were not pleased with the protest, carried out by six men and one woman, and took to the group's Facebook page to vent their anger.

“It is something really ugly and stupid and has nothing to do with our fight against Israel, you should delete the photographs.”

Israeli digital newspaper Ynet, said that some Palestinian commenters said the group had “behaved like animals”.

But for the clowning group, the protest had more meaning than just an ill-thought out strip:

“When you stand before this shameful fence all humanity is naked,” said the group’s spokesman, Iván Prado, in a statement on the group’s website.

However the group did apologise to anyone who might have been offended by their protest:

“We want to publicly apologize to all Palestinians who might be offended by our actions against the wall of shame that pierces the West Bank and every human heart,” he said

“This is not an attack on Islam, it is our way of protesting the existance of the wall,” he added.

The protest is not the first time the group have got naked for their beliefs. They stripped off in the West Bank in 2011, at the wall separating Morocco and Western Sahara in 2013 and in front of the fence erected by Spain between its North African enclave of Melilla and Morocco in April 2015.