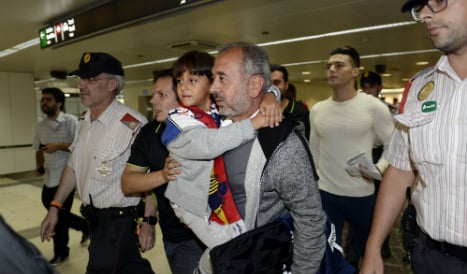 Osama Abdul Mohsen hit the headlines around the world when he and his son were tripped over by Hungarian camerawoman Petra Lazlo while they were trying to flee across the border from Serbia to Hungary.

While Lazlo lost her job following the incident, Mohsen and his son came to the attention of Miguel Ángel Galán, president of Spain’s Football Coach Training Centre (Cenafe), who, upon learning that Mohsen had been a football coach in Syria, offered him accommodation and a job with Cenafe in Getafe, just south of Madrid.

The Syrian father and son arrived in Madrid on Wednesday night to applause from well-wishers after travelling by train from Munich.

“Thank you, thank you,” Mohsen repeated as he left Atocha train station in Madrid with his two sons.

“We are very, very happy, but I am also worried for my wife and other children,” Mohsen added.

“They have been in Turkey for two weeks but I hope that soon they can come and be with us.”

Cenafe has said it will try to bring Mohsen’s wife and two other children to Spain from Turkey, where they are currently in the town of Mersin, close to the Syrian border.

Mohsen was tortured by the regime of Bashar al-Assad in Syria and eventually decided to flee the country as Isis moved closer and closer towards his town, according to El País.

“I escaped Syria because of the war: Assad’s troops were attacking us and Isis was a threat,” he said.

In Munich, Mohsen managed to find another of his sons, Mohammed Al Ghadabe, 18, who had fled Syria before his father and brother.

The three made their way to Madrid on Wednesday accompanied by a Cenafe student, Mohamed Labrouzi, who flew to Germany to bring the family to Spain and act as an interpreter.

While much of Spain has welcomed the arrival of Mohsen and his family, the country’s Interior Minister on Thursday warned that this was a one-off case and should not “be applied indiscriminately”.

George Fernández Díaz, speaking on Spain’s National Radio warned that people could not “start bringing refugees to Spain outside the proper procedure”.

“Asylum is the responsibility of the state,” he said, “and refugees should go through the proper procedures according to the European Commission.”