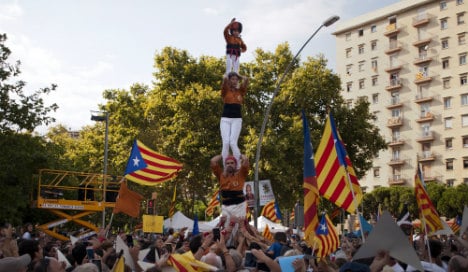 More and more foreigners living in Catalonia are in favour of independence. Photo: Jorge Guerrero/AFP

There is nothing more Catalan than a “castell”, or human pyramid. But some of the people standing on each other's shoulders in this particular castell come from far beyond Catalonia.

The seven-layer acrobatic tower reflects the cosmopolitan air of this region. And of the many nationalists here pushing for independence from Spain, the foreigners are among the most fervent.

As well as those born here, there are Latin Americans, Asians and Africans who feel just as Catalan as their neighbours and, like many of them, want to defy the Spanish government by breaking away.

“I am an Indian. But I am a Catalan Indian,” says Wilmer Gonzalez, a native American from Venezuela with long black hair.

He took part in the old folk tradition of the castell recently in Barcelona, along with Bolivians, Ghanaians and others.

When he moved to the region six years ago, “for us, Spain was just Spain.

We knew next to nothing about Catalonia,” he says, speaking Catalan with a Venezuelan accent.

“But straightaway you notice that this place is different: its language, its character and its culture.”

Catalonia has long been a land of immigration. One of Spain's richest regions, it drew many people from elsewhere in the country last century and in recent years more have come from around the world.

Today nearly 15 percent of its 7.5 million inhabitants are foreigners.

But it still preserves its cultural character. Authorities estimate that 95 percent of the population understand the Catalan language and three quarters speak it.

The language was repressed during the Franco dictatorship in Spain from 1939 to 1975, but the regional government from the 1980s made it a priority to revive the tongue.

It is now official policy in the region to teach immigrants the Catalan language as well as the region's history and traditions. That is how Wilmer and his wife Leslie Silva got into castells.

On September 11th they joined in a mass rally in Barcelona to mark Catalan national day, at which crowds protested for independence.

That marked the start of campaigning for a regional election on September 27th which Catalan nationalist leaders are casting as a vote on independence.

“If people cry out for freedom in Catalonia, I am with them, out of fraternity and for the dignity of the Catalan people,” Wilmer said.

At last week's rally, Argentine, Moroccan and Uruguayan flags flew among the red and yellow Catalan ones.

“Catalonia has sufficient resources to live much better than it does,” said Claudio Cipone, a 48-year-old Argentine who has lived in the southern Catalan town of Tarragona since 2001.

“But it is always bound by what Madrid decides,” he added, echoing a common complaint by Catalans that they pay too much tax to Madrid and don't get enough back.

The foreigners have also brought their separatist sympathies with them to the region.

“In Pakistan I am a Saraiki nationalist,” he said. “And here I am a nationalist too.”

The secessionist coalition Junts Pel Si printed an electoral leaflet explaining its cause in Arabic, Chinese and Urdu.

The Catalan National Assembly, a powerful civic group campaigning for independence, has a department dedicated to immigrants.

It is run by Saoka Kingolo, 54, who settled here after leaving his home in the Democratic Republic of Congo.

“I was fleeing from a vicious dictatorship. When they told me that Catalans were not free, I laughed,” Kingolo said.

“But then I understood that if a nation does not feel free, that too is a kind of oppression, albeit a lesser kind,” he added.

“With independence we would no longer be immigrants, but the founding fathers of the Catalan Republic.”