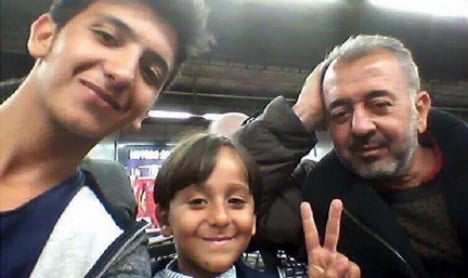 The Syrian family will arrive in Madrid on Wedneday. Photo: Stephan Richter / twitter

Osama Abdul Mohsen and his seven year old son Zaid hit headlines around the world when they fell to the ground after being tripped up by a Hungarian camerawoman as they attempted to dart across the border from Serbia to Hungary.

Now the father and son are heading to Madrid thanks to Spain’s Football Coach Training Centre (Cenafe), which has offered the Syrian refugee a job and accommodation after learning that he worked as a football coach back in Syria.

The Syrian father and his son, who got tripped up by the camerawoman #PetraLaszlo, he was a soccer coach in #Syria pic.twitter.com/desV2YaqPz

Osama Abdul Mohsen, who was a coach for first division team Al-Fotuwa, left Munich by train on Wednesday morning and is due to arrive in Madrid at around midnight with two of his sons.

The president of Cenafe Miguel Ángel Galán, made contact with the Syrian football coach after seeing his plight in the Spanish media.

“When we saw the story of Mohsen published in the newspapers we felt very bad about it,” Galán told El País.

He managed to contact the father and son via a Spanish journalist and offered to bring them to Spain, according to a statement released by Cenafe.

“We are a centre for coaches and we like to help everyone who works in this area,” Cenafe director Conrado Galán told El País.

An Arabic-speaking student from Cenafe, Mohamed Labrouzi, met the father and his two sons in Munich, and the four boarded a train heading for Madrid on Wednesday morning.

Mohsen’s wife and two other children are currently still in Turkey, but Cenafe has said it will try to bring them to Spain to reunite the family as soon as possible.

Cenafe have a flat ready for the Syrian football coach in Getafe, a city just to the south of Madrid, paid for from its advertising budget.

“As soon as he learns Spanish, we plan to offer him a job at our organization,” Cenafe president Miguel Ángel Galán said.

Sara Hernández, mayor of Getafe, confirmed to Spanish media that Mohsen would work with the city’s football club, Getafe FC:

“We will work with Getafe FC so that the father can coach there, seeing as he has experience in that area,” she confirmed during a press conference on Wednesday.
“This is a step to show the solidarity of the city of Getafe in response to this human drama,” she added.