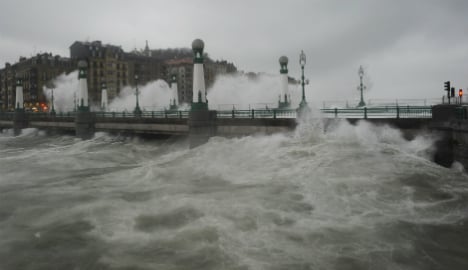 Spain’s national weather agency, Aemet, has issued a special warning across the north-west of the country, with torrential rain and strong winds and waves expected throughout Wednesday.

“From Tuesday to Wednesday a strong Atlantic storm will make its way across northwestern Spain before heading towards the British Isles,” Aemet said in a statement. A warning has been issued across 33 provinces. Aemet is forecasting waves of up to six metres off the Galician coast and winds of up to 120 kilometers per hour.

Torrential rain is forecast for Galicia, the neighbouring region of Asturias and northwest Castilla y León as well as much of western Spain, from the north to the south.

Spain’s interior minstry has issues warnings for people to be careful in the windy weather:

“After strong gusts of wind, stay away from ledges, wooded areas, sea-front promenades and buildings under construction.”

The bad weather is due to a cyclogenesis – pre-cyclone conditions that are caused by a strengthening of low pressure in the atmosphere.