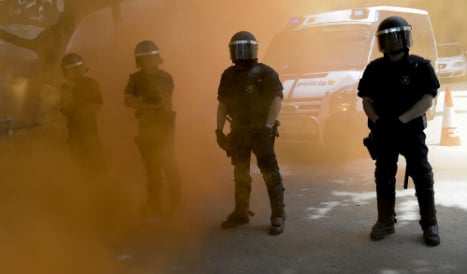 Ester Quintana was shot in the eye with a rubber bullet. Archive photo: Josep Lago / AFP

Catalonia's regional government agreed to pay her compensation although they have still refused to accept liability for the incident almost three years ago.

Two officers from Los Mossos d’Esquadra, the police force of Catalonia, are awaiting trial accused of ‘disproportionate’ policing after firing rubber bullets at protestors during the General Strike in November 2012.

Quintana became a cause célèbre as a victim of police brutality and her case helped influence the Catalan government’s decision to ban the use of rubber bullets in April, 2014.

Spain has been criticized for coming down hard on peaceful protest, notably with the introduction in July of the controversial Citizen Security Law – dubbed the gag law by critics.

The figure of more than a quarter of a million euros was negotiated by taking into account medical and legal costs, and the physical and psychological impact on Quintana since the incident. It will be paid by the Generalitat's insurance company.

Announcing the compensation deal, Quintana's lawyer told a press conference in Barcelona that  “it was a major breakthrough” and one that could have positive repercussions on similar cases of police brutality.