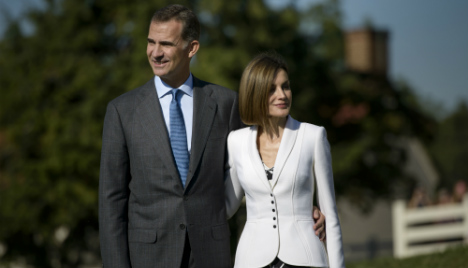 The Spanish royals began their first official state visit to the USA as King and Queen on Tuesday afternoon with a trip to Mount Vernon, the plantation home of George Washington the first president of the United States, and laid a floral tribute on his tomb.

The King and Queen of Spain laid a floral tribute at George Washington’s tomb in Mount Vernon. Official Trip to USA pic.twitter.com/eeedvPJLTS

They strolled around the estate, which stretches along the bank of the Potomac river in Virginia and is located around 15 miles south of Washington DC.

The royal couple are later due to visit the White House, where King Felipe will have a bilateral meeting with the US President Barack Obama, while Queen Letizia is expected to take a tour of the White House vegetable gardens with the First Lady, Michelle.

On Tuesday afternoon, the royal couple will meet with the US Senate Committee on Foreign Relations in the Capitol Building, before attending a reception thrown by Washington's Spanish community.

Wednesday will be a day filled with business and science, including a breakfast with business leaders at the Spanish Embassy, followed by a seminar titled “A Transatlantic Conversation” before King Felipe has lunch with various scientists who attended the seminar.

On Wednesday evening, the couple will attend a dinner thrown in their honour by the University of Georgetown, where King Felipe was once a student, where he obtained a master's degree in Science in Foreign Service.

On Thursday, King Felipe and Queen Letizia will travel to Florida where they will attend the opening ceremony of the Spanish Film Festival in Miami.

The visit will end on Friday with a trip to St Augustine, in northern Florida to celebrate the city's 450th anniversary. The city – San Agustin in Spanish – was founded by Spaniard Pedro Menédez de Avilés on September 8th 1565.