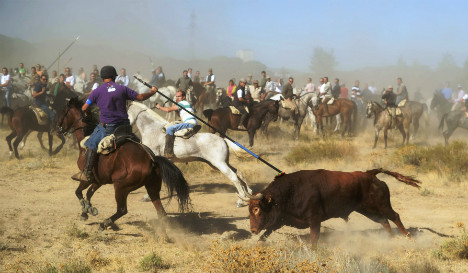 As one of bullfighting’s deadliest summers draws to a close, Spain has saved one of its most controversial and gruesome bull festivals until last.

The Toro de la Vega Festival, celebrated annually in the town of Tordesillas, near Valladolid consists of a bull being hunted through the town’s streets by lancers, some on horseback and some on foot, whose aim is to lance the animal to death.

The festival will kick off at 11am on Tuesday, when the sound of rocket fire heralds the start of the chase. This year’s bull, Rompesuelas – or Groundbreaker in English – will set off through the streets pursued by lancers.

Their aim is to stab the 600kg bull to death before it reaches the pine forest at the edge of the town. If the bull does manage to outrun its pursuers, it will be “pardoned”.

“But how can animal cruelty be a cultural tradition?” this bull asks in a cartoon that has been widely shared on social media in Spain.

But the gory ritual has drawn staunch criticism over the years, with cries for it to be banned reaching fever pitch on Saturday, when over 100,000 people took to the streets of Madrid in protest.

Spokeswoman for animal rights group Pacma, Laura Duarte, told crowds: “We want to show that the majority of citizens are against the Toro de la Vega and that it is only the locals in Tordesillas who continue to defend and enjoy this barbaric act.”

100,000 gather in Madrid to protest against the cruel and barbaric Toro de la Vega http://t.co/q5zbF1DjMi pic.twitter.com/CA3Qb24J70

The more than four-centuries old tradition has also drawn criticism from the country’s Socialist opposition, with leader Pedro Sanchez promising to ban the event if he wins Spain’s upcoming general election.

And the opposition to the event is nothing new; it was deemed cruel even by the regime of dictator General Francisco Franco and was banned between 1966 and 1970 for its “cruelty to animals”.

On Tuesday, Tordesillas is expecting hundreds of protestors and has drafted in extra police to cope with the influx. Around 200 police officers from Spain's Civil Guard, National Police and Civil Protection will patrol the town, which is expecting around 30,000 visitors for the event. A surveillance helicopter will also watch over the chase.