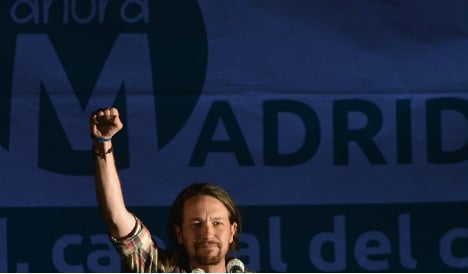 Pablo Iglesias said the victory of the hard-left candidate Corbyn was a sign the anti-austerity movement was getting stronger in Europe.

“At last we will have an ally in the United Kingdom with whom we share conclusions and a plan to defend social rights through policies that fight inequality,” Iglesias wrote in an opinion piece in centre-left newspaper El Pais on Monday.

He said Corbyn's victory reflected “the failure of social-liberalism” in workers' parties that have shifted to the centre in recent decades.

Corbyn's victory as leader of the Labour party is great news, it's a step forward towards a change in Europe for the benefit of the people.

Iglesias compared the divisions in Labour to the plight of the two big parties that have dominated Spanish politics since the 1970s: the Socialists and the conservative Popular Party.

In just over a year and half, Iglesias has led Podemos to third place behind those two parties in the opinion polls, threatening to carve up the vote in December's general election.

He likened criticism of Corbyn to the treatment of another of his allies, the Syriza party in Greece. Corbyn became the leader of the UK's Labour party on Saturday. Photo: AFP

Like Corbyn and Syriza's leader Alexis Tsipras, Iglesias has vowed to defend the poor and has protested for an end to austerity measures passed in the economic crisis.

“We are hearing the same insults that the Greek government and we ourselves have received; the same condescension by those who say his role will be merely to draw attention but that he will never govern,” Iglesias wrote.

But in the anti-austerity political camp, Iglesias insisted, “there are more and more of us in Europe and we are getting stronger.”