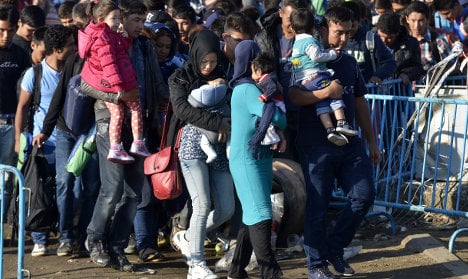 The appeal from Anne Hidalgo of Paris, Barcelona's Ada Colau, and the mayors of the Greek and Italian islands of Lesbos and Lampedusa – which have become key entry points for migrants entering Europe – was published in top-selling Spanish daily El Pais.

“European cities are ready to become places of refuge. States grant the status of asylum but it is cities that provide shelter,” they wrote in the column titled: “We, the cities of Europe”.

“Our municipal services are already working on hosting plans to ensure bread, shelter and dignity to all who flee war and hunger. All that is needed is the help of States,” they said.

The column was published on the eve of an extraordinary meeting of EU interior ministers in Brussels called to seek urgent solutions to a migration crisis unprecedented in the bloc's history.

“We ask that they do not turn their backs on cities, that they listen to the cry that is coming from them, we need the support and cooperation of states.”

City halls, charities and impromptu Facebook groups across Europe are marshalling offers of aid, putting pressure national governments to accept refugees risking their lives to reach Europe from trouble spots such as Syria.

Colau in August called for the establishment of a “network of cities of refuge to give a home to thousands of civilians fleeing from war”.

Since then, more than 100 Spanish cities have taken up the call: among them Madrid, Cadiz, A Coruna, Santiago de Compostela and Zaragoza.

The biggest refugee crisis plaguing Europe since World War II has divided the continent with Germany pushing for compulsory quotas within the Europe Union but eastern European nations snubbing the proposal.

The International Organization for Migration said over 430,000 migrants and refugees had crossed the Mediterranean to Europe so far in 2015, with 2,748 dying or going missing en route.