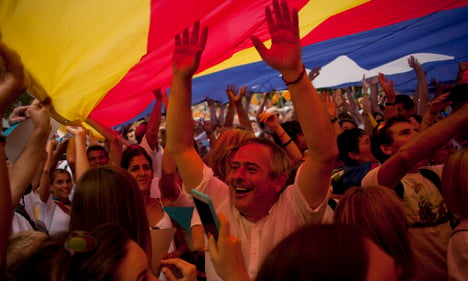 They packed both sides of a major road into the city in a sea of striped Catalan flags and white t-shirts, yelling and whistling while some formed human pyramids — a Catalan folk tradition.

The show of force on Catalan national day — the fourth such mass rally in as many years — came at a time of high political tensions, three months ahead of a general election in Spain.

Authorities did not immediately release an estimate of the turnout but organisers said 500,000 people had signed up for the demo in this rich northeastern region of 7.5 million.

Polls this week showed pro-secession candidates could win a majority of seats in the Catalan parliament in ballots on September 27, even though they may fail to win the most votes.

If they win parliament, Catalan president Artur Mas has vowed to push through an 18-month roadmap to secession for the region, which accounts for a fifth of Spain's economy.

“Once the people have spoken through their vote, we will all take on board what the majority decides,” said Mas, a conservative who is campaigning in an alliance with left wing nationalists.

Mas is casting this month's election as a de facto vote on independence, like ones in Scotland last year and in Canada's French-speaking province of Quebec in 1980 and 1995. Those votes all resulted in a “no” to secession.

“We would have preferred a referendum like in Quebec and Scotland, but the only course left to us was to organise these elections,” Mas told a gathering of foreign media on Friday.

Polls show a majority of Catalans are in favour of a referendum even if they are almost evenly divided on independence.

Separatists say they pay an unfair level of taxes to Madrid compared to the funding Catalonia receives.

“No matter much they tell us we cannot leave, we will push ahead,” said Vida Domenech, 38, a demonstrator wrapped in a red, yellow and blue pro-independence flag.

“We cannot let ourselves be the only region that pays so much and receives so little.”

Opponents of Catalan independence are divided.

Rajoy refuses to negotiate on independence and has not publicly discussed possible constitutional reforms.

British Prime Minister David Cameron warned last week that Catalonia would drop out of the European Union if it broke away from Spain.

Mas disputes that. He said the prospect of creating a new state in Europe was nothing new.

“Thirteen countries have joined the EU in little more than a decade. Of those, seven were not independent states 25 years ago,” he said.

“We are not asking for the moon. We are just aspiring to what others have.”

Many Catalans insist that the separatists do not speak for them, however, and want to stay in Spain.

“I am fed up of this business,” said Joan Madorell, a 51-year-old architect, drinking coffee at a cafe in Barcelona.

The elaborate multi-coloured display ended with speeches and a band playing the “Catalan rumba”, a traditional folk tune.

“I am looking forward to independence with special enthusiasm,” said Joaquim Batlle, 91, who spent time in jail for his defence of Catalan nationalism during the dictatorship of General Francisco Franco which tried to suppress Catalan identity.

“We have been waiting for it for centuries and I believe the moment has come,” said Batlle, who walked with the aid of a crutch.