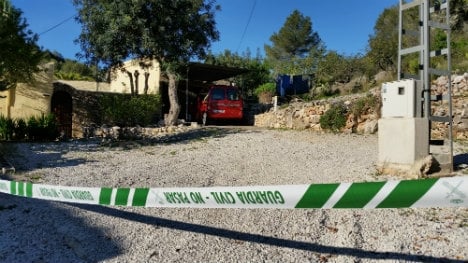 Peter and Jean Tarsey were found shot to death at their villa in Jalon in March. Photo: Fiona Govan

Peter David Tarsey, 77, who competed for Britain at the 1956 Olympics in Melbourne, was found shot dead in March along with his wife, also 77, at their home in Jalon (Xalo) near Benidorm on the Costa Blanca.

The authorities said at the time that they appeared to have been shot with a small calibre weapon, but there was no sign of a break in.

Police in the province of Alicante detained a man on Thursday who they suspect murdered the couple, a local police spokesman said.

The spokesman declined to give further detains but Spanish media said the man was a Moroccan national.

Tarsey, who also competed in two Commonwealth Games, winning a bronze in 1958, and his wife had been living in the region for the last 18 years but had been trying to sell their villa at the time of their deaths.

They were discovered by friends who had become concerned that they had not been seen for several days.

An estimated one million British nationals live in Spain all or part of the year, according to the British embassy in Spain.