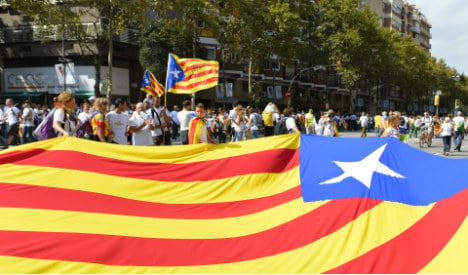 Crowds gather in Barcelona for La Diada. Photo: Gerard Julien / AFP
19.00 Turnout
Organisers claim around two million people attended the march in Barcelona. The police insist it was more like 1.4 million.
Either way a huge turnout for independence. 17.59 The end!
The big yellow arrow has reached the end of the route and the crowds are closing behind it. Meanwhile some rousing music begins to play from the stage.

17.57 Shouts of 'independencia'
As the big yellow arrow makes it way throw the crowds it is met with shouts of “independencia”.
Here is a shot from the air broadcast live on the Catalan television channel TV3.
17.36 Piqué!
The Barcelona footballer Gerard Piqué is in attendance. We don't know whether he has brought his wife, the Colombian singer Shaikra along.

17.33 March along the Meridiana
The Via Lliure, as this march is called stretches across 5.2 km of road. There appear to be hundreds of thousands participating but we haven't got any estimates on turnout as yet.

The demonstration will officially start at 17:14, symbolising 1714, the year when Barcelona finally succumbed to Bourbon troops, after 14 months of cruel military siege. The whole demonstration is supposed to last approximately an hour and a half, including the final speeches that are normally given by the president of the ANC, Jordi Sánchez, and that of Omnium Cultural, Quim Torra, and other outstanding representatives of civil society.
At 17:14, a giant arrow pointer symbolising the way to the Catalan Republic will travel along Meridiana Avenue, starting at Roselló Porcel Street, at the entrance of Barcelona, and going all the way up to ‘Parc de la Ciutadella’, where the Catalan parliament is located.

17.00 Back in Barcelona
The streets are filling up for the big arrow pointing moment which will come at 17.14. Catalans across the world are sharing photos as they celebrate their National Day. Sáenz de Santamaria and Artur Mas were seated next to each other at a funeral in Barcelona in February Photo: AFP

The Spanish government has criticized Artur Mas for hijacking La Diada and making it an “electoral act”.
Government spokesman,Soraya Sáenz de Santamaría said that La Diada used to be “a celebration for all Catalans” but that Catalonia’s regional president had “breached neutrality” by using Catalonia’s national day celebrations to promote his candidacy and cause.
The deputy prime minister and member of Spain's ruling Popular Party was speaking during a press conference after Friday's cabinet meeting in Madrid.
Her comments did not go down well with a crowd watching the big screen in Barcelona. La Senyera, the Catalan flag of four red stripes on a yellow background, is everywhere on La Diada. Giant versions are hung across entire buildings while innumerable smaller versions flutter from balconies or are draped across cars. A high percentage of people walking the streets either wear or carry a version of the flag, although many versions on sale are now rather unpatriotically made in China.

A slightly different flag, la estelada, has surged in popularity in recent years. It features a white star on a blue triangle (or sometimes a red star on a yellow triangle) over the senyera's red-and-yellow stripes and is the unofficial symbol of the Catalan independence movement. This is canine is demanding independence. But is his bark worse than his bite?

In case you ware wondering what this demonstration is all about, The Local asked Liz Castro, who is the International Committee Chair of the Catalan National Assembly, which organizes the mass march for independence on La Diada.

Read her provocative opinion on why the Catalan people need to stand up to Madrid.

Why are Catalans on the street marching for independence? The streets are filling up ahead of the start of Via Lliure in Barcelona. People are getting ready with their giant arrows which are designed to symbolically point the way towards independence, apparently.

Earlier in the week Gerry Adams, the president of Sinn Féin (political wing of the terrorist group IRA) has sent a message of support to the Catalan people in their struggle for self-determination.

Hundreds of bikers met up in the town of Vic and are on their way to Barcelona to join in the Via Lliure.

Crowds are gathering for the march which will take place through the streets of Barcelona this afternoon. More than 2,000 coaches have been laid on by the NAtional Catalan Assembly (ANC) to bring participants from across Catalonia to the capital to march under the slogan,  “Let's start building a new country.”

The first buses have already arrived.

Someone has posted a picture of some tasty looking Diada cakes in the form of the Catalan independence flags. Last week Spain's former Socialist Prime Minsiter (between 1982-1996), Felipe González, urged Catalans to turn away from the path towards independence, likening the movement to the rise of fascism in Germany and Italy in the 1930s.

Message to Catalaonia: “We are much better together” says ex-PM

13.41 Ciudadanos are cooking up a storm

So how do you celebrate the Diada if you are not interested in independence?
Ciudadanos (“Citizens”), the centre-right party that began in Catalaonia and launched a national campaign this year, has been celebrating the Diada by cooking up a storm at a “rice party” in Tarragona. Inés Arrimados, one of C’s nine MPs in the Catalan parliament and the party’s candidate for the Catalan presidency in the upcoming elections, was accompanied by the party’s leader, Albert Rivera.
It looks yummy!

13.31 Looking ahead to the elections

Pro-seccessionist parties look set to just clinch a majority in the Catalan parliament in elections called for September 27th which have become a de facto vote on independence.

This is a breakdown of the vote according to a poll published by the CIS on Thursday.

There is a bit of backtracking today from the government in Madrid over the Catalan question.

On Thursday the Spanish Foreign Minister Jose Manuel Garcia-Margallo seemed to open the doors to talks on constitutional reform and greater fiscal powers for Catalonia. “The government has since the very beginning wanted to start a dialogue that would solve this problem. And it probably involves a constitutional reform and a different system of regional financing,” he said.

But during a radio interview on Friday, Interior Minister Jorge Fernandez Diaz said the foreign minister's comments were taken out of context and did not reflect the ruling Popular Party's position.

The hero of Barça FC Lionel Messi has just announced the birth of his second son.

Congratulations to #Barcelona striker Lionel Messi and his wife Antonella on the birth of their second son Benjamin! pic.twitter.com/5oznAuQPk3

Castell building is a tradition unique to Catalonia and the championship final is currently underway in Tarragona. The human towers are formed by people balancing on the shoulders of others until they reach high into the sky.

12.25 Not everyone is caught up in the pro-independence fever Internationally renowned film director and Catalonia native Isabel Coixet has published a scathing piece in El País, revealing she is one of the silent majority of Catalan people who don’t care about independence, don’t like flag waving and who are “neither fascinated or sickened” by the idea of Spain.

“There are many more of us than it seems, more than the world thinks,” she writes.

She writes that most Catalans only want a health system that works, good education for their children and to be able to relax with a coffee on a weekend and speak “whatever language they want”. She wishes that speeches were “relegated to weddings and anniversaries”.

The speech ends with a cinematic reference, not comparing Catalonia to any famous on-screen independence struggles, but rather to a film where the past repeats itself, every single day.

“For too many years we’ve been trapped in time like Bill Murray in the film Groundhog day but without even having an Andie McDowell for whom it would be worth waking up day after day. Sure there are worse things, but right now we can’t think of any…” Déu n'hi do! (or wow, amazing! in Catalan) If all the Diada celebrations have made you eager to learn some of the lingo The Local has compiled a list of ten great Catalan colloquialisms that will definitely impress your Catalan friends.

11:00 Controversy from the mayor of Barcelona

Newly elected Barcelona mayor, Ada Colau has said that she will not be attending the demonstration this afternoon because of its “overtly political” nature and coming as it does just ahead of the elections on September 27th.

She did however mark the National Day with a ceremony outside the City Hall in Barcelona.

She also attended a tribute to former Chilean President Salvador Allende to mark the 42nd anniversary of Chile’s military coup, during which Allende died. While the official version said he committed suicide, many believe he was murdered in the attack on La Moneda, Santiago’s government headquarters.

The tribute has been celebrated in Barcelona, which is home to the Salvador Allende Centre, since 1985 but during the last city administration the ceremony was not attended by the city’s former mayor, Xavier Trias.

Here is the leader of the Socialist party in Catalonia, Miquel Iceta, celebrating La Diada in his own unique way.

The latest poll by CIS showed the Catalan socialists (PSC) would likely only win 7.4 percent of the vote on September 27th putting the party in fourth place and giving the pro-seccessionists parties a majority in parliament.

Lots of floral tributes piling up at the feet of the statue of  Rafael Casanova, the commander whose army was finally defeated on September 11th 1714 after the 14-month Siege of Barcelona. The surrender marked the dissolution of autonomous Catalan institutions, the removal of Catalan as an official language and the imposition of new laws from the newly centralised Spain.

It commemorates a famous military defeat and it was banned under fascist dictator General Francisco Franco. Read The Local's essential guide: Five things you need to know about Catalonia's national day. A good day to be a flag seller: Catalonia will be festooned with millions of 'senyeras' and 'esteladas' on September 11th. Photo: JOSEP LAGO / AFP

10:00 A ceremony has taken place at the monument of Rafael Casanova, the commander of chief of forces defending the freedom of Catalonia in 1714.

The Diada kickstarts the regional election campaign ahead of the September 27th vote which has been billed as a de facto poll on independence.

The Catalan leader launched his campaign on Thursday evening insisting that the election just over a fortnight away would give him “a democratic mandate” for his drive to defy Madrid by breaking the rich northeastern region away from Spain.

“In your hands is the strength and the tool to mark the political future of this nation: the vote,” said Mas, a conservative who is campaigning in an alliance with left-wing nationalists for the election.

“Once the people have spoken through their vote, we will all take on board what the majority decides,” he added, in a speech broadcast late Thursday a few hours before the official start of campaigning.