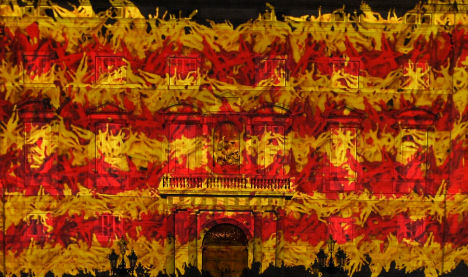 The show of force on Catalan national day comes as polls show pro-secession candidates are set to win an absolute majority in the 135-seat Catalan parliament in September 27th polls.

If they win a majority, Catalan president Artur Mas has vowed to push through an 18-month roadmap for secession for the region of some 7.5 million people which accounts for a fifth of Spain's economic output.

The debate over whether Catalonia should break away from Spain divides families and transcends ideological lines.

The pro-independence camp includes Mas' “Together for the Yes” list – made up of his conservative nationalist CDC party and the left-wing separatist ERC party – as well as smaller separatist parties.

Mas wants to organise an official independence referendum like those held in Scotland last year and in Canada's French-speaking province of Quebec in 1980 and 1995 which resulted in a “no” vote for separatists.

Polls show the vast majority of Catalans are in favour of holding a referendum even if they are almost evenly divided on independence.

But Spain's Prime Minister Mariano Rajoy has refused to allow a plebiscite, arguing it violates the Spanish constitution's stipulation that only the national government can call referendums on sovereignty, and that all Spaniards are entitled to vote in such a ballot.

“It is up to Spaniards to decide what they want Spain to be,” he often says.

Hundreds of thousands of flag-waving separatists staged a mass rally in Barcelona last year on Catalan national day and formed a 400-kilometre (250-mile) human chain across the region in 2013 in support of their cause.

#PresidentMas presides the official ceremony of the National Day of Catalonia #11S2015 pic.twitter.com/tS7B1zeMcp

“Let's start building a new country,” is the rallying cry for this year's demonstration which appears on posters promoting the event.

Catalonia's main pro-independence parties have agreed for the first time to run on a single unified list, the “Together for the Yes”.

“We want to manage our resources ourselves,” he said Tuesday, calling for “a more socially stable and prosperous country for all”.

Opponents of Catalan independence are more divided and less organised.

Spain's ruling Popular Party backs the status quo and Rajoy said Wednesday that what Catalonia needs is “a government that takes care of people's real problems”.

Just five years ago only one in five Catalans backed independence.

But Catalan nationalism has reached new heights during Spain's long economic downturn as Catalans rejected austerity cuts enforced by the central government and called for more autonomy over taxes.

Many Catalans were angered when Spain's Constitutional Court in 2010 overruled a charter adopted by Catalonia four years earlier which gave it the status of a “nation” and greater autonomy.

Catalan discontent has also been fuelled by Rajoy's refusal in 2012 to grant the region greater fiscal independence.

Pro-independence leaders argue that Catalonia pays a disproportionate level of taxes to Madrid in relation to the central funding it receives.

“Those of us who were never nationalists nor separatists are considering voting 'yes' just to have real federalism, a better democracy,” Barcelona mayor Ada Colau said Saturday, before accusing the central government of having an “authoritarian” attitude.

Political tensions have risen as the regional elections near.

Felipe Gonzalez, a former Socialist prime minister, compared Mas' separatist drive to “the German and Italian ventures of the 1930s” in an open letter to Catalans published in top-selling daily El Pais.

Mas responded with his own open letter “to Spaniards” where he complained of “insults, abuse and threats” on the part of the state.

Two European heavyweights, British Prime Minister David Cameron and German Chancellor Angela Merkel, have in recent days backed Rajoy, with Cameron warning Catalonia would leave the EU if it broke away from Spain.