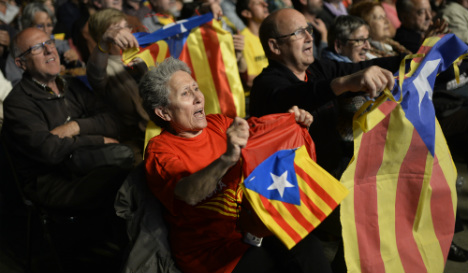 Catalan president Artur Mas has said that winning a majority of 68 seats in the 135-seat regional parliament in the September 27th election will suffice to push through an 18-month roadmap for secession for the wealthy northeastern region.

The “Together for the Yes” list, which includes Catalan president Mas's conservative nationalist CDC party and the left-wing separatist ERC, is set to win 60-61 seats in the regional assembly, according to the poll from the state-run Centro de Investigaciones Sociologicas.

CUP, a tiny anti-capitalist party that also supports secession from Spain, would win eight seats, enough to give the pro-independence bloc at least 68 seats in the regional assembly.

The party has criticised Mas' policies and its support for his independence plans remains uncertain.

“Together for the Yes” and CUP would attract a combined 44 percent of votes, according to the telephone poll of 2,999 eligible voters was carried out between August 30th and September 4th.

Under Catalonia's proportional representation system, pro-independence parties could win a majority of seats in the assembly even if they get fewer votes than parties that oppose independence.

Mas argues there is no option but to treat the regional election as a de facto vote on independence since Spain's conservative central government has refused to allow Catalonia to hold a referendum like the one held in Scotland, which resulted in a vote to stay in Britain.

Unemployment was Catalan voters' top concern, according to the poll, followed by the independence issue and corruption which came in third, the survey found.

Another poll published on Monday in centre-right daily newspaper El Mundo predicted the two pro-independence lists would win 70-74 seats and capture 46.1 percent of the vote.

Catalonia, which has its own distinct language and culture, is home to some 7.5 million people and accounts for a fifth of Spain's economic output.