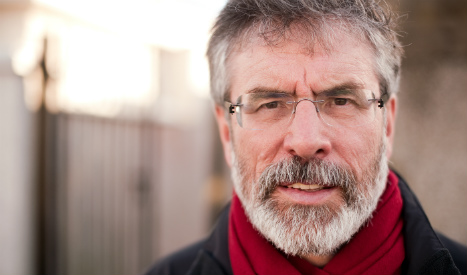 Speaking about the drive for an independent state, the 66-year-old Belfast politician, a veteran in the struggle for a united Ireland, praised the Catalan people.

“I want to express solidarity from Ireland, from Republic of Ireland to the people of Catalonia,” said the leader of Sinn Fein, the political party linked to the IRA.

“One of our leaders Paul Maskey will be in Barcelona to join with others in supporting your right to self-determination,” he said in the recording uploaded on Youtube on Wednesday.

Paul Maskey, the Sinn Féin MP for Belfast West will fly into the Catalan capital on Thursday and attend events to celebrate the Catalan national day.

“We wish you well, we are pleased that you have been able to continue the momentum toward self-determination. Go well. 'Visca la terra',” said Adams, who has always denied being a member of armed terrorist group, the IRA.

Both conservative leaders lent support to Spanish Prime Minister Mariano Rajoy in comments last week insisting that the sovereignty of Spain should be respected.

But it is not the first time that Irish leaders have pledged their support to the Catalan independence cause.

Earlier this year, Christy Burke,  the Lord Mayor of Dublin and ex-IRA man, expressed solidiarity with the Catalan people.

“We know what it is like to be treated as second class citizens,” he said in May.

On Friday September 11th Catalonia will celebrate its national day with tens of thousands expected to march through the streets across towns and cities in the northeastern region.

In Barcelona a demonstration for a 'gateway to the Catalan Republic' is expected to draw over a million people on Friday afternoon.

The region will hold elections on September 27th with President Artur Mas insisting that the country could begin seceding from Spain if pro-independence parties win a majority.