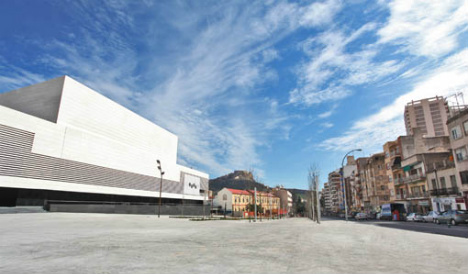 The ADDA theatre in Alicante has been ordered to pay the man €30,000. Photo: diputacionalicante.es

Alfredo Sánchez Sansano, 29, was hoping for a respite from a life spent all day every day indoors when he bought an opera ticket in August 2014.

Sánchez, who suffers from muscular dystrophy, a condition marked by the progressive weakening and wasting away of the muscles, is confined to a bed and has to use a respirator to help him breathe, but he doesn't let that get in the way of enjoying the same pursuits as many young Spaniards, he enjoys browsing Facebook and listening to music, especially opera.

He was hoping to fulfil a lifelong dream and see a live opera, but his hopes were dashed when the ADDA theatre – the Auditorio de la Diputación de Alicante – refused to let him in, despite the fact he had called “months in advance” to check that he would be able to attend.

The theatre made no effort to find an alternative solution and demonstrated “an absolute failure of diligence” the judge added.

Sánchez had been personally invited to the opera Oh, my son! by its composer, Marcos Galvany and arrived with his parents in a specially adapted vehicle.

The theatre originally offered Sánchez tickets for the next day’s showing, but subsequently changed its mind and told him he would be unable to attend “for security reasons”.

Sánchez’s family is delighted at the court ruling. “It recognizes the right of my son, just like any other person, to visit any public space he wishes,” his father, José María, told Spanish daily El Mundo.

But the celebration is tinged with sadness, as several friends – including the opera’s composer – have not supported the family’s year-long struggle in suing the theatre: “it has been a very hard year,” José María said.

For José María, the outcome is proof that, despite his disability, which renders him 84 percent handicapped, his son should be treated just like any other young man.

“Alfredo is just as alive as any other person and the only thing he wants is to be able to do normal things within his limitations,” he said.