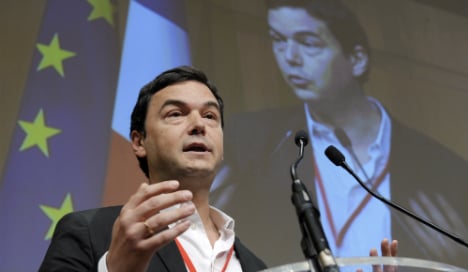 Piketty is the author of “Capital in the Twenty-First Century”, a hugely popular book about the widening gap between rich and poor.

He was once close to the French Socialist Party, but has recently become a stern critic of President Francois Hollande, slamming him for reneging on his campaign promise of fiscal reforms.

Nacho Alvarez, a Podemos economist, told reporters in the French capital that Piketty and the party would work on “a comprehensive plan to fight against poverty” in Spain, where general elections are due in December.

Rajoy has pushed through tough budget cuts and labour reforms which he says are responsible for Spain's return to economic growth.

The unemployment rate however remains extremely high at more than 22 percent.

Podemos is in third place in opinion polls but could force the PP out by teaming up with the second-placed Socialists.

That would herald a striking change in Spanish politics which has been dominated by the two big parties since the 1970s.

“We want to sit down with everyone, and in particular those who come from the Socialist family and who do not agree with the direction this family has taken in the past few years,” he said.