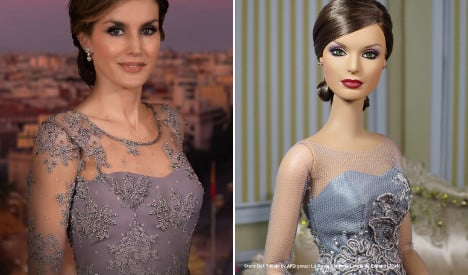 Queen Letizia now has her own doll. Photo: AFD Group

Spain’s Queen Letizia is regularly feted as one of the most stylish royals in Europe, and how many other royals can claim to have their very own doll?

Russian company AFD Group, which specializes in making miniature versions of some of the world’s biggest stars, will premiere the royal doll at the Madrid Fashion Doll Show Convention, which takes place between September 11th and 13th.

“The doll is just amazing and it is even more beautiful in person,” Madrid Fashion Doll Show spokeswoman, Mónica Núñez, told The Local.

Núñez attributed the popularity of royal dolls to “that special touch of old-fashioned glamour” that royal families have. AFD has tried to make the doll as lifelike as possible, modelling its clothing on two outfits worn by the Spanish queen at two different official functions.

The top of the dress, complete with transparent sleeves, brings to mind the dress worn by Queen Letizia to the coronation of King Willem-Alexander of the Netherlands. The bottom of the dress, a full skirt embroidered with jewels is an almost exact replica of the Felipe Varela dress Queen Letizia wore to a dinner prior to the wedding of the Duke and Duchess of Cambridge in the United Kingdom, pictured above.

The doll sports a swept side fringe and one of Letizia’s favourite hairstyles: the classic chignon.

The doll will be shown to the general public on Sunday September 13th between 11am and 4pm in the Sell and Exposition room of the Hotel Ayre Gran Colón in Madrid, which is hosting the doll convention.

The theme of this year's doll fashion show is Vogue and the show will feature barbies specially designed by such world-renowned designers as Versace, Dior and Karl Lagerfeld.