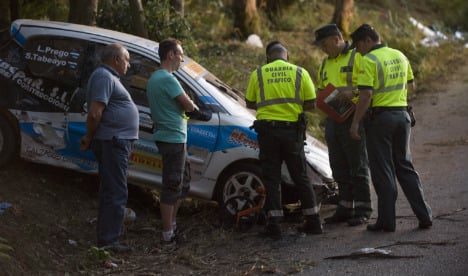 The death toll following the crash during the A Coruña rally on Saturday evening was raised to seven after the girl succumbed to her injuries.

An adult and another child remained in a critical condition on Monday morning while five others were being treated in hospital for less serious injuries. Another ten were discharged on Sunday.

The funerals for the six victims, including a child, who died at the scene will take begin on Monday.

Among the victims were Ana Cayazzo and partner Miguel Caridad, who died instantly. Their first child was due to be born today.

The Civil Guard have launched an investigation into the crash, which occured when a rally car sped out of control on a curve during the race and ploughed into spectators.

Footage showed the vehicle, a Peugeot 206 XS, flipping over several times through crowds that had gather on the verge t0 get a view of the race in which 130 vehicles took part.

The event around the city of A Coruña in the northwestern region of Galicia is a relatively minor race, not part of the World Rally Championship.

Three days of mourning have been declared in Carral and Cambre, two villages near the crash site where the victims were from.