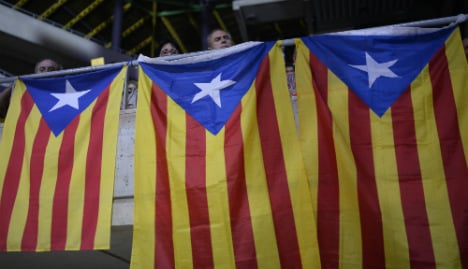 Spain's prime minister defended Thursday a contested judicial reform that would make it possible to quickly suspend leaders of Catalonia if they go ahead with a secession plan for the wealthy region.

The reform, presented by Spain's conservative government on Tuesday, would increase the powers of Spain's Constitutional Court to ensure its rulings are met, a move aimed directly at Catalonia.

The proposal, which still must be approved by parliament where Prime Minister Mariano Rajoy's Popular Party has a wide majority, allows the court to fine and even suspend public servants and authorities who do not comply with its rulings.

Such a measure would have allowed the court to suspend Catalan president Artur Mas when he pushed ahead with a symbolic independence referendum in November 2014 despite a ruling suspending it.

The government wants parliament to vote on the reform in the week following a regional election in Catalonia on September 27, which the pro-independence Catalan government has billed as a vote on independence.

Mas has said that if pro-secession parties win a majority, they will aim to split from Spain within 18 months.

Rajoy said the reform was “crucial to strengthen the rule of law”.

“This reform is what is most reasonable in a situation like this, where there is a gentleman who announces the creation of parallel state structures and who, if he wins the election, will declare independence unilaterally,” he said in an interview with Cope radio.

“In no case will there be independence for Catalonia, it is madness,” he added.

But the regional president of the Catalan government blasted the move, labelling it an “echo of the Inquisition”.

He said that the initiative reminded him of the “reactions from the thirties” and “is not proper of a democratic country”.

Meanwhile the main opposition Socialists have accused the Popular Party of “electioneering” and “attacking democracy” with the reform, which was drawn up without consultation with other parties.

The Constitutional Court is made up of judges appointed by the government.

Seven of the 11 judges are conservative, according to left-leaning daily newspaper El Pais.