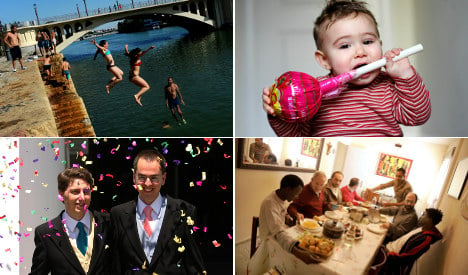 The documentary inspired by Ridley Scott's Life in a Day will be compiled of short video snapshots of people's lives on one particular day of the year,

Residents of Spain and Spaniards living abroad can submit a video of no more than 15 minutes of their day, reflecting on their passions, their fears, their beliefs and their dreams.

Participants will be asked to all film on Saturday October 24th this year, just as the Life in a Day project was all filmed on July 24th, 2010.

Coixet and a number of Spanish actors promoted the project, called Spain in a Day, at a press conference on Friday.

“It is a movie that is going to be made from the fragments of the lives of everyone,” Coixet told broadcaster RTVE, which is also part of the project. “Births, weddings, baptisms – moments of loneliness, moments of happiness. After sex, before sex, sex – well, I don't know, that, too.

“We are trying collect the lives of all Spaniards in a way that is real, authentic, entertaining, dramatic. But above all, it has to be true.”

Videos must be submitted to RTVE by November 15th. Coixet will then begin to view and select which videos will make it into the film.

The movie will first premiere at the San Sebastian film festival next year before hitting move theatres and later being broadcast on TVE.

English filmmaker Ridley Scott's LIfe in a Day project received more than 4,500 hours of footage in 80,000 submissions from 192 nations. The same format has been copied in the UK, Japan and Italy.