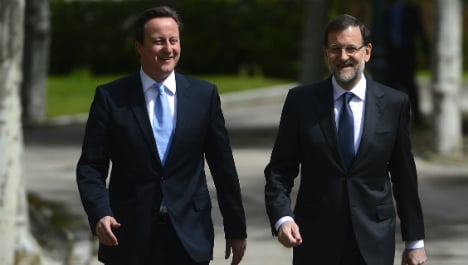 The prime ministers of Britain and Spain made a joint call for structural reforms in the European Union to make it more competitive and boost growth, employment and innovation ahead of their meeting on Friday.

The two leaders penned an article published in Spain's financial newspaper Expansion on Friday ahead of talks in which the focus was expected to be on the migration crisis.

The article plays into the political agenda of both Rajoy, who is seeking re-election in December, and Cameron, who wants to reform Britain's relationship with the EU before a membership referendum due by the end of 2017.

The centre-right leaders said both countries had acted to turn around their economies that, five years ago, “were on the edge of the abyss”.

Both countries had shared structural problems such as excessive debt and low competitiveness that, if neglected, “would have led to economic ruin in the long term”, but they were now growing and creating jobs.

“We have learned a clear lesson from all this: countries that consolidate their public finances guarantee the sustainability of their welfare state, carry out ambitious structural reforms and incentivise employment, create the greatest number of jobs and bring back confidence in the future,” they wrote.

“The results will be better if we work together to create a European Union that has growth, employment and innovation as its reason for being.”

They agreed that a “real reform” of the euro zone was necessary but that this should not damage the rights of EU members, such as Britain, that do not belong to the single currency.

But despite plans to rally support for the EU reforms the bilateral meeting is expected to hijacked by the burgeoning refugee crisis.

Just hours before a press conference scheduled for Madrid at 3.30pm, Cameron announced that the UK will provide resettlement for thousands more Syrian refugees.

The UK will provide resettlement for more Syrian refugees, taking them from camps. This is on top of our existing £900m programme (1/2).

Downing Street has yet to reveal exact numbers but the issue is expected to be discussed in detail between the two leaders.