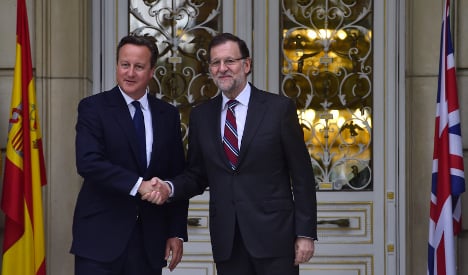 The two prime ministers held talks in Madrid on Friday as pressure mounted on both countries to do more to help tackle the refugee crisis across Europe.

But while Cameron insisted that Britain would extend the help offered to Syrian refugees and seek to relocate them directly from refugee camps neighbouring the war-torn nation, Mariano Rajoy failed to outline any real plans to shoulder more of the burden.

“We have already accepted around 5,000 Syrians and have introduced a specific resettlement scheme, alongside those we already have, to help those Syrian refugees particularly at risk,” Cameron said in a joint press conference.

“Given the scale of the crisis and the suffering of the people, today I can announce that we will do more – providing resettlement for thousands more Syrian refugees,” Cameron said.

“Today I can announce that we will provide a further £100 million, taking our total contribution to over £1 billion pounds. That is the UK's largest ever response to a humanitarian crisis,” Cameron said.

“£60 million of this additional funding will go to help Syrians still in Syria. The rest will go to neighboring countries, to Turkey, Jordan and Lebanon, where Syrian refugees now account for one quarter of the population.”

Both leaders said they had shared views on tackling the issues connected with migration and said clear distinctions should be made between those fleeing conflict zones and those seeking a brighter economic future.

“We will continue our approach of taking them direct from Syrian refugee camps,” Cameron said, adding that the government would announce more details next week.

“Britain's aid is supporting these camps. If we were not doing that, the numbers attempting the dangerous journey to Europe would be far, far higher.”

Mr Cameron said the UK would also carry on supporting efforts to detect and disrupt people-smuggling gangs and continue search and rescue operations to save migrants in the Mediterranean which have already assisted more than 6,700 people.

“Britain will act with her head and her heart,” said the British leader. “For those economic migrants seeking a better life, we will continue to work to break the link between getting on a boat and getting settlement in Europe, discouraging those who don't have a genuine claim from embarking on these perilous and sometimes lethal journeys.

“For those genuine refugees fleeing civil war, we will act with compassion and continue to provide sanctuary.”

“I want to send the message out that the best way to get a new life is not to make this perilous journey,” he said.

Cameron failed to mention any plans to accept those already within Europe’s borders.

Rajoy agreed that the refugee crisis was “the most important challenge facing the EU” but likewise insisted that efforts be made to crackdown on the “people trafficking mafias” responsible for transporting desperate souls across the sea into Europe.

The UN's top envoy for refugees on Friday said EU nations must develop a common strategy to resettle up to 200,000 refugees who have already made it to Europe, adding that “no country can refuse to do its part.”

Cameron defended his government's record on Friday, saying Britain had already provided more than 900 million pounds in aid to “help those affected in Syria and the region.”

“No European country has done more than Britain in this regard,” he said.

“Were it not for that massive aid, the numbers making the perilous journey to Europe today would be even higher,” Cameron said.

“There isn't a number of people we can take that will bring this crisis to an end,” he said. Meanwhile Spain has rejected the EU commission quota plan and said it will accept only 2,749 of the 5,849 refugees it was asked to re-home.

On Friday, Rajoy insisted that Spain was pulling its weight. “Asylum requests this year are triple then they were last year,” he said adding that the quota issue will be reassessed later this month.

“Spain is constantly giving asylum to people…and we are going to meet our commitments,” he added.

He said that he had established an interministerial committee to address the issue of how Spain can best shoulder its responsibility to migrants.

Seven ministers from different departments will hold their first meeting on Monday, he said.

It's been a pleasure to have you in #Spain, @David_Cameron Count on my disposal to continue working for a better #EU pic.twitter.com/mR0ypsYZLe