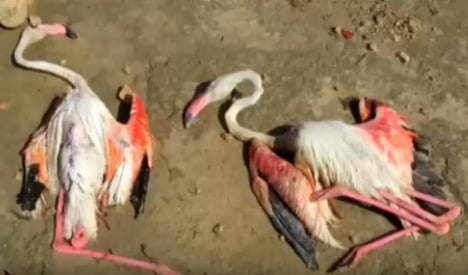 An estimated 300 flamingos died and several dozen injured birds had to be rescued from Pétrola lake, in Albacete, southern Spain, after freak hail storms struck on Monday.

While official figures have not yet been released, Ovidio García, from Albacete’s fire service, Sepei, said the number of dead flamingos numbered close to 300.

The fire service was called out by environmental officers at around 10.30am on Monday to help with the recovery of the animals.

García told regional newspaper La Voz de Galicia that Sepai had taken two inflatable boats to the scene in order to access the birds in the middle of the lake: the most difficult place to access.

In Torre del Compte in Aragon, eastern Spain, locals filmed the fierce hail storm as it battered their homes, swimming pools and cars.