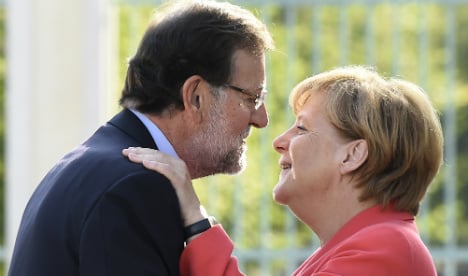 Mariano Rajoy used a two-day visit to his old friend Angela Merkel to rally support for his campaign for re-election while acknowledging that the influx of refugees and migrants into Europe posed the “greatest challenge” of the coming years.

Under mounting pressure from the EU, Mariano Rajoy said he was willing to discuss the possibility of Spain increasing its refugee intake without actually committing to shouldering more of the burden.

“What we're seeing now is the greatest challenge for Europe in the coming years, I have no doubt about that,” Rajoy said in a joint press conference with Merkel on Tuesday, pointing to past “tragedies” when migrants coming from North Africa have died trying to reach Spanish shores. Rajoy went as far as to say “we are willing to discuss the topic again,” when asked about increasing the number of refugees his country takes in, but insisted that the EU better coordinate asylum policies and that Greece and Italy establish more registration centers for refugees.

In July Spain rejected the EU commission quota plan and said it will accept only 2,749 of the 5,849 refugees it was asked to rehome.

While Rajoy was discussing the 'importance' of the migrant crisis with Merkel on Monday, his deputy prime minister Soraya Sáenz de Santamaría admitted that Spain was 'saturated' with immigrants and could do no more to help.

Once again enjoying their shared pursuit of hiking, the two leaders spent several hours strolling together around the lake at Meseburg castle, the German government’s countryside guest house north of Berlin, on Monday, before having dinner together.

It was clear that Rajoy’s visit was designed to shore up international support for the ruling Popular Party ahead of the general election later this year and to promote Spain as an economic success story thanks to the government’s reforms.

A success he outlined in an editorial published in German newspaper Handelsblatt on Monday when he described  “how his country went from the sick man of Europe to a model for reform in a short time.”

In it he explained how under his reforms, the nation went from  “the midst of the most severe crisis that we have ever experienced” to a place  “where we’re proud to be referred to as ‘the Germans of the South”.

“Spain shows that reforms pay off,” Merkel said at the press conference on Tuesday. “Spain contributes to Europe as a whole coming out of the crisis step by step.”

The Spanish conservative leader, who took office in 2011, also won public support from Merkel in what promises to be one of his most challenging domestic issues.

Speaking of the Catalan independence movement, the Chancellor said: “We all have to respect European treaties guaranteeing sovereignty and the territorial integrity of each state.”