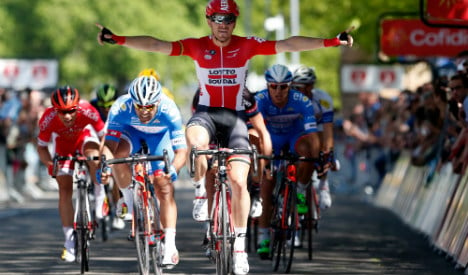 Kris Boeckmans will be kept in an induced coma after Saturday´s crash. Photo: AFP

The 28-year-old suffered head injuries and bleeding in his lung as well as severe facial wounds when he came off his bike in a crash-ridden eighth stage of the three-week tour around Spain on Saturday.

He was placed in an induced coma after undergoing surgery on Saturday night, but doctors had hoped to bring him out of the coma more quickly.

However, the severity of his injuries have complicated that process meaning he will remain in a coma for the next seven days.

“By reducing the sedative medication the doctors tried to take Kris Boeckmans out of the induced coma,” Lotto Soudal said in a statement on their website.

“The lung injuries (pneumothorax, laceration of the lung, bleeding of the lung and swollen pulmonary tissue) made it too difficult for Kris to sufficiently breathe independently, so he was placed in an induced coma again, this will certainly remain the case for the next seven days.”

EDUCATION
How Barcelona’s ‘bike bus’ scheme for schoolkids is getting noticed worldwide
Url copied to clipboard!