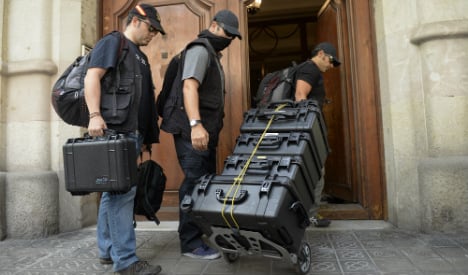 Police arrive at the headquarters of CatDem in Barcelona. Photo: Josep Lago / AFP

Police searched the headquarters of the party and of its CatDem Foundation in Barcelona as well as the home of a former party treasurer and four town halls across Catalonia as part of the probe.

Spanish authorities suspect the foundation collected commissions from companies that won public works from town halls that were run by the conservative nationalist party, a judicial source said.

The operation came hours before the first major pre-campaign act by the pro-independence coalition “Together for the Yes” made up of the CDC, the left-wing ERC party and civil society groups that want Catalonia to break away from Spain.

The coalition is treating Catalonia's regional election on September 27th as a plebiscite on independence.

It has vowed to push through an 18-month roadmap for secession for the region of some 7.5 million people which accounts for a fifth of Spain's economic output if it wins a majority of seats in the regional assembly.

The general co-ordinator of the CDC, Josep Rull, denied any wrongdoing on the part of the party and accused Spanish authorities of seeking to “improperly influence” the elections.

“The goal is not transparency but to create a media circus before very significant elections. They can search all the headquarters they want, they won't find anything because there is nothing to find,” he told a news conference.

The operation is linked to the arrest last month of Catalan businessman Jordi Sumarroca, who is close to the CDC, on suspicion that one of his firms paid commissions in exchange for winning public works contracts.

It is likely to generate tension ahead of the election between the CDC and the left-wing ERC party, which has taken a hard line against corruption.

Catalan president Artur Mas's party was already under investigation for alleged illegal financing as part of another corruption scandal that erupted in 2009.

The founder of the party, Jordi Pujol, who ruled Catalonia from 1980 to 2003, resigned all his honorary positions last year after admitting he kept an undeclared fortune in tax havens for over three decades.

Six of his seven children are also under investigation for allegedly accepting bribes to help companies secure public contracts while their father was in power.

“Mas's drift towards separatism has just one goal, that we don't talk about these cases,” said Ines Arrimadas of the centre-right Ciudadanos party which opposes Catalan independence during a radio interview

The CDC recalled that before the last Catalan regional election in 2012, when Mas began backing separatism, newspapers published leaked police reports alleging that he had foreign bank accounts – accusations which were never proven.

The party also points out that the Pujol family's legal woes began after they began to back independence for Catalonia.

“I ask the leaders of CDC and of the Catalan government not to seek perpetrators outside of its ranks,” Deputy Prime Minister Soraya Saenz de Santamaria told a news conference after a weekly cabinet meeting.

The police operation deals a blow to Catalan separatists' argument that secession is an opportunity to renew public institutions after a string of corruption cases which fuelled public anger in Catalonia and the rest of Spain.

The top candidate in the pro-separatist coalition, Raul Romeva, said in a television interview Friday after the searches were underway that the fight against corruption requires “a structural response” and the “creation of a new country” after the election.