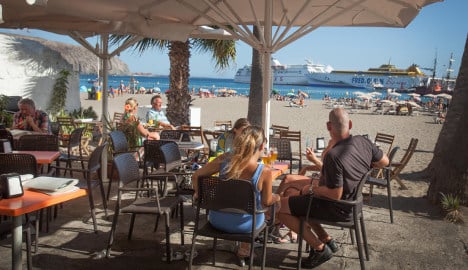 Foreign tourists spent €37.129 billion between January and July alone – the highest in recorded history, according to a report released by the federal Tourist Expenditure Survey released on Thursday.

This was an increase of 7.7 percent over the same time period from last year.

Spain has received a record number of tourists so far this year at 37.9 million, who have in turn been spending record amounts of cash each day – dropping on average €113 per person daily.

And each tourist spent nearly a grand – €978 – over the course of their vacation under the Spanish sun.

Tourists from the UK lined the coffers of Spain’s tourism industry the most, spending a total of €7.58 billion. But although one in four tourists you may see poking around gift shops hail from the British Isles, the British only contributed a fifth of the total tourist spend. It was the American tourists, though, who seemed to have the deepest pockets with each US native spending on average €161 per day.

Catalonia, the coastal region in northeastern Spain, earned the most from tourism racking up €8.588 billion a figure that represents amost a quarter (23.1 percent) of all of the money spent by tourists across Spain.

But despite the fact that tourists have been bringing in evermore money to the cash-strapped country, Spain has seen backlash against mass tourism in recent years at some of the top vacation spots.

Barcelona’s new mayor has vowed to introduce measures to limit the number of tourists to the Catalan capital.

Authorities have already announced a clampdown on the rental of private homes to tourists including through such popular sites as Airbnb.

Magaluf is among those resorts attempting to crack down on tourists behaving badly through a raft of new bylaws prohibiting exhibitionism and binge drinking.

And Benidorm on the Costa Blanca will now be employing the help of British bobbies to patrol the shores where more than one million Brits holiday each year.