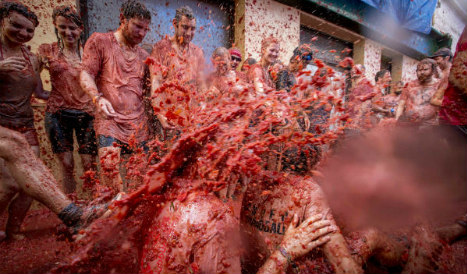 Google has been rolling out more and more ambitious plans for its Street View in recent months, allowing people all over the world to explore some of Spain’s most interesting sites, from the Moorish fortress of the Alhambra to the “world’s most dangerous footpath”, the Caminito del Rey.

But the American company ran into trouble while trying to capture one of Spain’s most iconic festivals on Wednesday, when its Street View car was destroyed during the annual La Tomatina festival in Buñol, eastern Spain.

The driver made the questionable decision to drive through the middle of the giant tomato fight, but the car definitely came off worse in the battle after being pelted with the mushy red fruit and jumped on by excited revellers.

“The Street View team went to La Tomatina with the aim of collecting images after the tomato battle had finished,” a Google spokesman told The Local.

“Unfortunately, there were still some people around when we arrived with the car, which ended up trapped in the crowd and suffered quite a bit of damage,” the spokesman added.

Pictures uploaded to Twitter show several people mounting the car – which is equipped with state of the art 360-degree cameras.

The car’s windscreen wipers, mirrors and cameras were all damaged during the event after being hit and dented by overeager tomato throwers.

A spokesman for Google told The Local that the company was currently investigating the incident and was relieved that no one was hurt.

The spokesman added that it was unclear whether Google would be able to use the images captured from the festival because of damage sustained by the cameras.