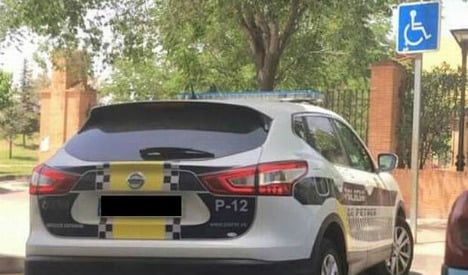 The photo the woman took of the police car parked in the disabled person's parking space Photo: Facebook / Twitter

The offending picture, which was posted online last month, showed a police car parked in a disabled parking space in a town in the southeastern province of Alicante, accompanied by critical remarks using strong language.

The police said the officers were rushing to stop vandals in a nearby park, and quickly filed a complaint against the woman, citing controversial new legislation known as the citizens' security law.

But the central government's representative in Alicante shelved the complaint, scrapping the €800 ($912) fine, with a spokesman telling AFP it had “nothing to do with the Citizens Security Law, it was just a picture of a vehicle that was published”.

The law has been criticized by Amnesty International and other rights groups as well as by associations representing lawyers and journalists, with some saying it harkens back to the dictatorship of General Francisco Franco.

Critics have accused the government of trying to curtail the right to free assembly and muzzle protests at a time of high unemployment.