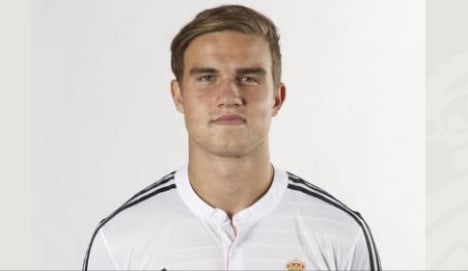 Eero Markkanen has been dropped for being "too fat". Photo: realmadrid.com

It must be tough to be dropped by one of the world’s biggest football teams before you’ve even played for its first team but that is what happened to Finnish striker Eero Markkanen.

And to make matters worse, he claims he was dropped from Real Madrid Castilla, Real’s B team, because he was “too fat” after allegedly putting on 18kg (40lbs or 2.8 stone) over the summer break.

The 24-year-old player, who was signed by Real Madrid Castilla’s coach, French footballing legend Zinedine Zidane, responded by posting a tongue-in-cheek photograph on his Twitter profile of his face, which he had altered using an app to make him appear fatter.

The photograph was accompanied by the phrase “going for a jog” in Finnish as well as hashtags sarcastically bidding farewell to his career and appears to make fun of the claims that he put on such a significant amount of weight over the course of the summer.

At six feet five inches tall, Markkanen was known by his nickname of “The Tank” and was bought by Real Madrid for €2 million in summer 2014.

On the pages of Real Madrid's Academy, Markkanen is described as “A quality forward with great technique who is comfortable playing with both feet. He has demonstrated that he knows how to make the most of his physique to get past defenders. ”