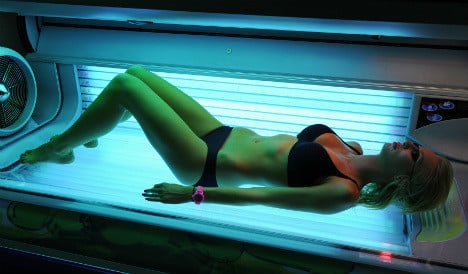 On a warm August evening in Madrid a steady stream of tanned customers parade out of a tanning salon – even in sunny Spain, the need to catch some rays can turn into an addiction.

The Spanish capital receives an average of 2,749 hours of sunshine per year, according to the Spanish weather agency, double the amount received by London. That does not stop Macarena Garcia, a university student, from seeking out UV rays.

“My family does not like it, they tell me it is not healthy… but they live near the beach! I work here and I also want to tan,” she said as she left the Solmania tanning salon in the centre of Madrid.

She is not alone. Jose Manuel Rodriguez, a handsome 36-year-old dancer, said he comes to the salon up to three times a week “in order not to lose (his) natural tan”.

Jose Carlos Moreno of Spain's academy of dermatology, (AEDV), does not hesitate to call this need to be tanned an addiction.

“They are people who never feel that they are tanned enough,” he said before comparing them to “anorexics who always feel like they are too fat”.

Their profile: mainly women and people under the age of 40 — based on study participants — who tan more than two times a week to the point of obtaining an excessively orange or chocolatey skin tone. A tanning salon in the centre of Madrid. Photo: Gerard Julien / AFP

The symptoms are similar to those of heroin addiction, according to Joel Hillhouse, a professor of public health at East Tennessee State University in the United States who has studied the psychology of tanning.

They include a desire to tan on waking, a needed for increasingly bigger “doses”, feelings of anxiety when not tanning and annoyance when friends and family comment on their excessive tanning, he said.

Some people continue to using tanning beds even though they have skin cancer, Hillhouse said.

“We even had a few that were willing to admit to us that they had done things like steal money in order to do indoor tanning. They would actually take their roommate's or their parents' money,” he said.

Researchers say that exposure to ultraviolet rays itself can be addictive.

“One of the reasons why the tanners tan is not only how they look, but how it makes them feel,” said Steve Feldman, a professor of dermatology at Wake Forest University in South Carolina.

Sunlight stimulates the release of endorphins, hormones that result in feelings of relaxation or euphoria very similar to that generated by morphine, Feldman said.

The World Health Organization has since 2012 classified UV-emitting tanning devices as carcinogenic to humans.

Brazil became the first country in the world to ban indoor tanning bed in 2009, followed by Australia in 2014.

Australia has the highest rate of melanoma in the world with 11,000 cases per year. Melanoma is the deadliest kind of skin cancer,  and is highly linked to sun exposure.

According to Vanessa Rock, the chair of the National Skin Cancer Committee in Australia, studies have shown that sunbeds increase melanoma risk by 20 percent, regardless of age at first use.

But skin cancer rates have stabilised among those under the age of 45 thanks to “public education campaigns and greater awareness”, Rock said.

In Spain 3,600 cases of melanoma are diagnosed each year.

The US Food and Drug Administration last year ordered that marketing material for sunlamps must carry warnings that, “Persons repeatedly exposed to UV radiation should be regularly evaluated for skin cancer.”

There is still no specific treatment for addiction to tanning.

Hillhouse recommends setting up support groups like Alcoholics Anonymous and try to substitute tanning with relaxing activities like yoga.

“If you need to tan you call up your tanning buddy and he says, 'No, no let's go for a walk' or whatever,” he said.