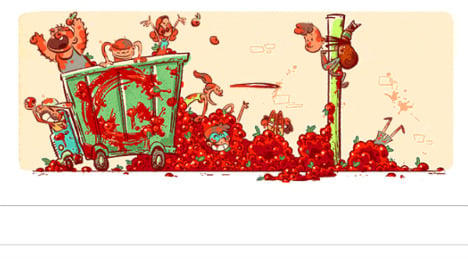 Log onto google.es today and you will be greeted with a virtual representation of what thousands of people are getting up to at midday in the town of Buñol, in Valencia, eastern Spain.

La Tomatina: All you need to know about the world's biggest food fight

Today marks the 70th anniversary of La Tomatina, the hour-long food fight that takes place in Buñol on the last Wednesday of August, during which people don their goggles and pelt each other with overripe tomatoes .

Over 150 tonnes of tomatoes will be hurled this year during the event, which is now ticketed to control the number of tourists in the town, this year 22,000 tickets were made available.

The festival began in 1945 when a street brawl broke out near a vegetable stall, with participants grabbing fruit and veg to throw at each other. They had so much fun they repeated the fight the following year and despite authorities originally trying to clamp down on the food-filled fest, it became an official festival in 1957.

The Goggle Doodle, created by American illustrator Nate Swinehart, shows an animated depiction of the giant food fight, including the all-important ham leg that is traditionally placed at the top of a pole. People are challenged to climb the pole and rescue the ham leg before the tomato fight can begin.

Google is also capturing the festival for its Street View, filming 360 degree before and after shots to allow viewers around the world a glimpse of the weird and wonderful festivities.

Images should be published within the next few weeks and will join other Spanish sites immortalized on Google Street View such as the Caminito del Rey, the “world’s most dangerous footpath”, the Sagrada Familia and the Alhambra.