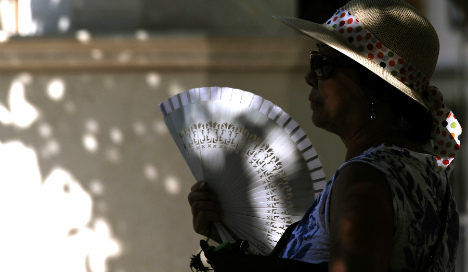 Spain registered its hottest ever temperatures during the first six months of 2015. Photo: Cristina Quicler/AFP

The average temperature in Spain during the first six months of 2015 measured 15.5C and is the hottest ever registered, according to Aemet, Spain's national meteorological agency.

Many Spaniards have been sweltering this summer, as heatwave after heatwave struck causing wildfires in several areas.

In July, areas of central and southern Spain baked under temperatures that rose well into the 40s, reaching record highs.

“If you compare this record July with our reference period of 1971 – 2010, the difference is 3.17C,” Aemet spokesman, Ana Casals, told Spanish daily 20 minutos, adding that the significant rise in temperatures was a “genuine atrocity”.

But Casals also cautioned blaming rising temperatures completely on climate change, explaining that there can also be meteorological explanations.

“You have to take the climatic variability into consideration,” she said adding that “a year with more storms will of course be cooler”.

It is not just Spain that was feeling the heat during the first six months of the year: average global temperatures between January and June were the highest ever recorded according to the National Oceanic and Atmospheric Administration (NOAA), based in the United States.

According to Aemet’s latest figures, temperatures in Spain are set to rise by three to five degrees before the end of the century. The temperature increases are to be less pronounced in coastal areas and in the Balearic islands and more intense in the Pyrenees, as well as in the centre and south of the country.