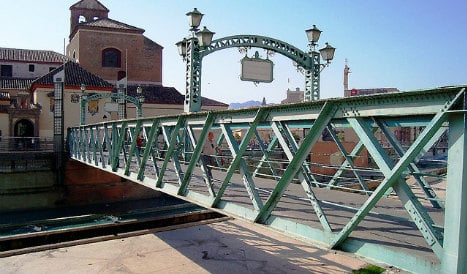 A drunk Englishman fell asleep on top of the arch on the famous Malaga bridge. Photo: maGdaa/Flickr

The 40-year-old British man, who has not been named, was on holiday in Malaga when he decided, while in a drunken state, to scale one of the city’s most emblematic landmarks.

He then fell asleep on top of one of the archways of the Puente de los Alemanes.

Spanish police discovered the sleeping Briton at around 2am on Saturday morning and, fearing for his condition, called the local fire brigade to help get him down, according to regional newspaper, Diario Sur.

Firemen used ladders to help the man down from the archway of the bridge, which spans Malaga’s Guadalmedina river.

The bridge was given to Malaga as a gift from Germany in 1909 in recognition of the Malagan people who waded into the river to save German sailors when their ship, the SMS Gneisenau, ran aground in 1900.

Once he was down from the archway, police officers tried to talk to the man, but described his speech as “babbling” and arrested him for “disturbing public order”.

It is just the latest example of British nationals behaving badly while on holiday in Spain.

In early August, two English police officers were sent to patrol the popular British holiday spot of Magaluf in Mallorca to help control disorderly British revellers and now the scheme will be expanded to Benidorm.

British photojournalist Peter Dench recently released a book titled “British Abroad” featuring photographs he had taken of his fellow countrymen at their worst, succumbing to the excesses of the Spanish holiday island of Ibiza.