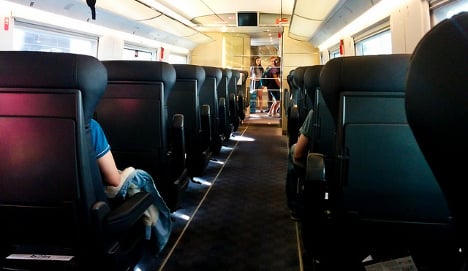 Inside a train in Spain. Photo: Iris / Flickr Creative Commons.

Catalan police are searching for a man that they said bit the ear of a ticket inspector on a Renfe train travelling near Barcelona on Saturday, Spain's largest trade union, Workers' Commissions (CCOO), said on Monday.

The ticket-inspector was performing his regular duties on the train while stopped at the Mollet Santa Rosa station on Saturday morning.

When the inspector asked one young man for his ticket, the passenger failed to produce it and then “pounced on him unexpectedly and bit him on the ear ” so hard that part of the lobe ripped off.

But the ear-biter managed to escape before police arrived and authorities are still working to identify the perpetrator.

CCOO denounced violence against train workers in their statement.

“This again highlights the extremely precarious security conditions for workers in trains and stations” for commuter lines in Catalonia, the CCOO statement said. “Attacks on workers and travelers are repeated and unsustainable – excessive in relation to other modes of transport.”

CCOO also told Spanish media that there are an average of two to three physical assaults on train workers each month, which they attributed to the lack of infrastructure.

“It's a daily problem,” a CCOO spokesman told El Pais. “They care a lot about the high speed networks while the commuter service in Catalonia is abandoned.”