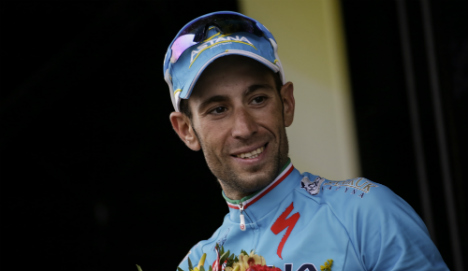 The Italian rider has been disqualified after cheating. Photo: Kenzo Tribouillard/AFP

Television footage clearly shows the Italian cyclist – who won La Vuelta in 2010 – holding onto his team’s car and being towed back into the peloton.

The images, broadcast by sports channel Eurosport, show Nibali's team car pull up alongside him before both the car and the rider accelerate quickly.

Nibali, who won the Tour de France in 2014, was towed by his Astana team’s car after crashing on stage two of the race with around 30km of the stage remaining before reaching Malaga’s Caminito del Rey.

The crash gave the Italian rider a delay of one minute and 30 seconds.

“The commissaires met after the stage after learning of the existence of images broadcast by Eurosport in which Nibali is helped by one of his team’s vehicles,” La Vuelta said in a statement released via the competition’s website.

“They have decided to disqualify the Italian and the director (of Astana) Alexander Sheffer, who was driving the Astana car,” the statement said.

“The film shows clearly that Nibali was clinging to the car for 200 metres,” added Bruno Valcic, the president of the race commissaires.

The video has garnered dozens of critical comments on YouTube, with many commenters suggesting the entire Astana team should be disqualified for such a blatant flouting of the rules.

He took to his Facebook page following the news of his disqualification and made a public apology while expressing his view that the penalty was harsh.

“For all that has happened, I truly apologise publicly to everyone who has been angered or ashamed by my actions,” the Italian wrote on his official Facebook page.

“What happened in the Vuelta happens in any race and this does not mean that I have not made a mistake that shouldn't be punished. The just sanction is the one the judges decide.”

He continued: “No, gentleman of cycling, the race is the race and no one waits for you. In cycling, there are many episodes like this and even more so after a crash.

“In the end, I had thought about a fine to pay and a penalty as is common to leave you out of (contention in) the general classification.

“I would have also accepted a 10 minute penalty. After all this, I will not be the first nor the last.“