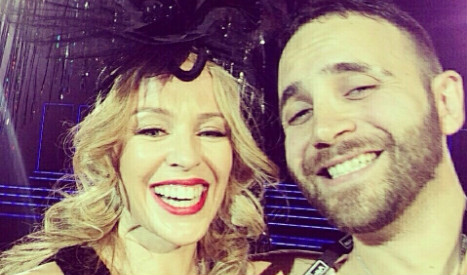 The photograph shows a man in his early thirties with a smile lighting up his face as he poses next to pop icon Kylie Minogue.

For any fan to come face to face with their musical hero it can be an emotional moment, but for Jalal Maher it was an impossible dream come true.

At the time he was living in an over-crowded refugee camp on the outskirts of Madrid having fled war torn Syria.

The star pulled him up on stage during a concert in Madrid after seeing him brandishing a sign stating that he was from Syria and rewarding him for the weeks it took him to save up for the ticket.

Now, ten months later and having just been granted residency in Spain, Maher reflects on how for those willing to embrace Spanish culture and work hard, the country is nothing but welcoming.

The Syrian conflict has brought to Europe’s doorstep the greatest refugee crisis since the Second World War. Around 45 percent of its population has been displaced with 4 million having fled the country to find safety, and Maher is one of them.

He considers himself lucky; as an only son he wasn’t obliged to fight in the Syrian Army, and with an uncle already living in Spain, he was able to get a visa to visit him.  Then, in July 2014, he applied for asylum and was placed in the Vallecas refugee center in the southeast of Madrid.

Maher wants to give “inspiration and hope” to Syrians in Europe, encouraging them to study hard and prove to Europeans that they are an asset to society.

“We are ambitious people, we are intelligent people, and we do not want to survive on government handouts,” he explained over coffee at a central Madrid café. “We want to build up the reputation of Syrians and to be held in high esteem.”

Jalal proudly tells The Local that on his first day at the refugee center, he asked about the Spanish lessons on offer. “But they said to me 'Wait!' You’ve only just arrived!’”

But he was adamant.  He joined all of the classes he could and months later, ended up getting the top marks of all those to take the Official School of Spanish exam. Jalal Maher next to the board congratulating him on his exam results. Photo: J. Maher

Since leaving the camp he has secured a job teaching English, which he learnt in Syria, and just last week received the news that he had been given Spanish residency.

Spain has seen a surge in illegal immigration with 68 percent more attempting to cross its borders in 2014 from the year before, among them some 3,300 Syrians.

But since rejecting the EU quota plan Spain has faced criticism for not pulling its weight and shouldering its share of the burden when it comes to asylum seekers.

It said it would relocate just 1,300 migrants as part of the scheme, a figure representing less than a third of the commission’s original proposal, but as far as Maher is concerned, Spain has been nothing but welcoming.

“I’ve been here for a year and a half and I can’t think of a single incident of being treated badly. I am in love with the Spanish people and the Spanish culture.  If you offered me any other nationality now I would say no, I want to be Spanish.”

He is, however, willing to admit that Spain isn’t top of the list for most of his fellow refugees who dream of ending up in Germany or Sweden.

“Everyone wants to go to Germany or Sweden and many of them try and reach there from Spain but if they are caught they are sent back to Spain. But people talk and they know that if they reach those countries from Greece they are likely to be granted asylum.”

He points out that the help offered to refugees in Spain – €100 a month, as well as food, accommodation and money towards training to help get a job – is generous but is limited to six months.

“I think that especially for families in need, this help for a limited time only is really not enough.  But what can we do?  Spain is going through a big crisis and can’t even help its own people.”

Maher says that every penny he can spare goes towards his family back in Syria. “My next step is to try and save my sister and her family who are still stuck in Syria. She worries about me being in a strange land but I say ‘Honey, it is you who is living in the strange land. You don’t have the basic human rights. I’m not even talking politics but water, electricity, safety,'” he explains.

Sending money into Syria is near impossible but he tries to send what he can through a network of friends and family. Each week he buys lottery tickets in the hope that his dreams will be answered with a big win.

“I want to send for my family to bring them here but I can’t sponsor them officially because I don’t yet have the assets,” he said, adding that there are alternative illegal routes to be considered.

“But such methods are expensive and very risky,” he admitted.

“If I should be so lucky why can't they?”