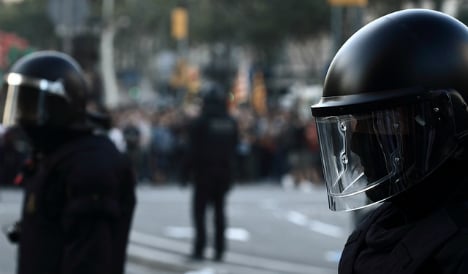 The lifesize image of a riot officer from the Mossos d'Esquadra – complete with helmet and blood-spattered shield – was painted onto cardboard for Barcelona’s famous Gràcia street fiesta.

It had been drawing crowds to John Lennon Square in the Gràcia neighbourhood of Barcelona until it was removed on Tuesday.

The cardboard riot policeman which had eyeholes so people could get their photographs taken behind it, was one of hundreds of decorations installed for the Catalan capital's biggest and most colourful street festival, which welcomes thousands of visitors every year.

Los Mossos d'Esquadra removed the cutout after claiming it was “disrespectful” and have lodged an official complaint with the fiestas committee, la Asamblea Libertaria de Gracia, for allowing the use of an image of a police officer.

Rules have been tightened under Spain's controversial new Citizens Security Law, which detractors have dubbed the 'gag law' for limiting freedom of speech, and photographing police officer, and even police cars is now a crime.

The first to be fined since the law came into force on July 1st was a man who branded the police lazy in a post on facebook.

Last week a woman  was fined €800 for posting a photograph of a police car parked in a disabled bay.