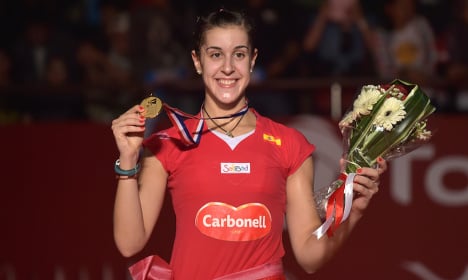 Carolina Marin of Spain poses with her gold medal on the podium at the awards ceremony. Photo: Adek Berry/AFP

The 22-year-old's face did not give anything away as organisers played the old version of the anthem with lyrics by fascist poet Jose Maria Peman during the podium ceremony in Jakarta, images broadcast on Spanish TV showed.

The world number one looked straight ahead and smiled as the red and yellow Spanish flag was raised during the ceremony after her two-game victory over Indian second seed Salina Nehwal.

The online edition of daily newspaper El Mundo called the use of the old anthem, which includes the lyrics “Long live Spain! Raise your arms, sons of Spain, who will once again arise”, a “serious mistake on the part of tournament organisers”.

“An older version of the anthem was played during the Women's Singles medalcceremony following Marin's retention of the title which she won a year ago,” the Badminton World Federation said in a statement.

“The Badminton World Federation and the hosts, the Indonesia Badminton Association, sincerely regret this unfortunate mistake.”

Spain's national anthem, the “Royal March”, has been played without words since 1978, three years after Franco's death, when Peman's lyrics were ditched.

It is not the first time that the old anthem has been played during a podium ceremony for a Spanish athlete.

When Spanish cyclist Alberto Contador won the Giro d'Italia in 2011, organisers accidentally played the Franco-era version of the anthem during post-race celebrations.

The Davis Cup final between Spain and Australia in 2003 was marred after the wrong Spanish anthem was played at the opening ceremony.

In that case organisers accidentally played a republican anthem from before Spain's 1936-39 Civil War which ushered in the Franco regime.