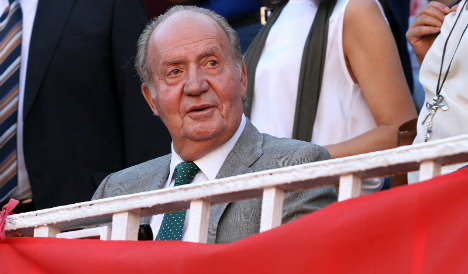 Just over a year since his abdication in favour of his son, Felipe, Spain’s King Juan Carlos seems to be enjoying his different pace of life; this week, sitting in the front row of San Sebastian’s bullring to welcome back bullfighting three years after it was banned in the city.

Never one to take heed of political correctness – he has been vilified in the past for his penchant for big game hunting in Africa – the former monarch was in his element watching the bullfight and cheering on the matadors in San Sebastian's Illumbe bullring.

The retired monarch was accompanied by his daughter, Princess Elena, and his grandchildren Felipe Juan Froilán and Victoria Federica, who sat in a box with front-row views of the bullring.

Speaking to television channel Televisión Española, the former monarch said that bullfighting was a “Spanish asset that we have to support”.

He added that it was his first visit to San Sebastian's bullring and that it was “thrilling” to share the experience with his daughter and grandchildren “who have always supported the national fiesta”.

The bullfighters entered the ring to a huge round of applause from the 6,000-strong crowd and according to regional newspaper El Diario Vasco:

“People who are pro-bullfighting enjoyed their favourite spectacle with the freedom they were denied by the previous city council.”

This week’s bullfighting festival – part of the city’s Semana Grande celebrations – marks an end to the ban brought in by leftist pro-independence coalition, Bildu, which scrapped bullfights three years ago, the last one taking place in August 2012.

The controversial tradition – which is banned in Catalonia – was reinstated by the Basque Nationalist Party (PNV) and Basque Socialist Party (PSE), who won power of San Sebastian’s city council in May’s local elections.

Not everyone shared Juan Carlos’ enthusiasm for the return of bullfighting to the northern Spanish city; around 200 protestors gathered outside the ring to protest against bullfighting, while others protested against the monarchy, shouting their support for a republic and an independent Basque Country.

One of Spain’s most famous bullfighters, Francisco “Fran” Rivera, was scheduled to take part in the bullfighting festival but, after suffering a serious goring earlier in the week was replaced by López Simon.

The owner of several Spanish bullrings courted controversy this week when he claimed it was perfectly fine for children to watch bullfights and was far more damaging for them to watch a gay pride parade.