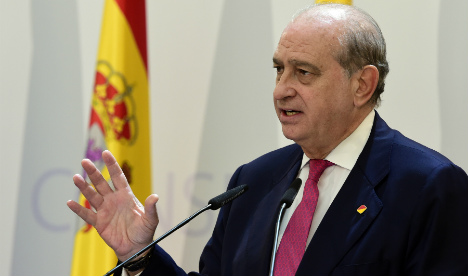 Yet while analysts agree that corruption “burdens” both the ruling conservative Popular Party (PP) and the main opposition Socialists, they disagree on the political fallout.

Interior Minister Jorge Fernandez Diaz will be be asked to explain why he met with disgraced former IMF head Rodrigo Rato, who has become a symbol of corruption in power, at his office on July 29.

Rato has been named as a formal suspect in a criminal probe into alleged fraud during his time as chief executive at Bankia, a Spanish bank that had to be bailed out by the government in 2012.

A former finance minister with the PP, Rato is also being investigated for tax fraud and money-laundering in another case.

Separately, Carlos Estrada — another PP member and the former mayor of Morraleja de Enmedio, a town near Madrid — who was already charged in a corruption case, resigned from the party this week after he was accused of profiting from the sale of used clothing.

The daily Catalan newspaper La Vanguardi called corruption “a sword of Damocles” that threatens both the PP and the Socialists in a recent editorial .

The scandals have contributed to the rise of new parties such as far-left Podemos, a close ally of Greece's ruling Syriza, and the centrist Ciudadanos.

The two groups did well during local elections in May, which saw the PP lose power in several regions and municipalities, including the capital Madrid, a long-time conservative bastion.

Both new parties have rallied against corruption and demanded that the interior minister resign over his meeting with Rato.

But commentators diverge on how the corruption will affect the forthcoming polls.

He called graft “a burden” for both the traditional parties, which have dominated politics since the country returned to democracy following the death of longtime dictator General Francisco Franco in 1975.

For the PP it is a “handicap” that could eclipse a recent improvement of the economy that saw the party boost its lead in voting intentions in a survey published last week, Villoria said.

The PP came in first place with 28.2 percent support, according to a poll carried out by the state-run CIS research centre in July. This figure was up from 25.6 percent support in April.

For Edurne Uriarte, a political science professor at Madrid's Juan Carlos I University, the survey results showed that corruption will play “a very limited role” in the upcoming elections.

She noted that the Socialist Party was re-elected in regional polls in the southwestern area of Andalucia in March “despite numerous cases of corruption”.

“The credibility of the PP is at its lowest level,” he said, adding this is why the party has not been able to capitalise on the economic recovery.

Spaniards “don't trust it and they have not yet perceived” the improvement in the economy, Bouza said.

Spain emerged in 2013 from five years of on-off recession and the government forecasts the economy will grow 3.3 percent this year – more than twice the average forecast for eurozone countries.

But the unemployment rate is still dire at more than 22 percent – the second-highest in the eurozone, after that of bailed-out Greece.

In the CIS poll, unemployment topped Spaniards' list of main concerns while corruption came in second.

“Be a good politician, trick and steal all that's possible until you amass an insane quantity of money in our Swiss bank,” reads the description on the game's website.

Despite this context, Uriarte predicts that support will continue for the PP due to “the good economic indicators and the memory of the Socialists' clumsy handing of the start of the economic crisis”.