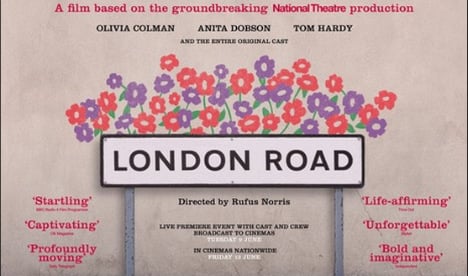 The film will be shown at Spain's most presitigious film festival. Photo: Movie poster of London Road

The movie, an adaptation of an avant garde musical by the same name which Norris directed at London's National Theatre about the murder of five women in 2006, will screen out of competition on September 26, they said in a statement.

“The film follows the community who found themselves at the epicentre of the tragic events. Using their own words set to an innovative musical score, 'London Road' tells a moving story of ordinary people coming together during the darkest of experiences,” it said.

The movie, which features Tom Hardy and Olivia Colman, will premiere at the Toronto film festival which runs September 10-20.

The 63rd San Sebastian film festival, the highest-profile movie event in the Spanish-speaking world, gets underway on September 18.

The festival, held each year in San Sebastian, a picturesque seaside resort on the Atlantic coast, was originally intended to honour Spanish language films but has established itself as one of the most important movie festivals in the world.

It hosted the world premiere of Alfred Hitchcock's spy thriller “North by Northwest” in 1959 and Woody Allen's “Melinda and Melinda” in 2004.