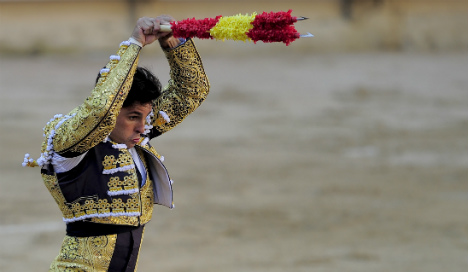 Francisco Rivera Ordóñez, 41, was gored on Monday during a bullfight in Huesca, northeastern Spain.

The housewives favourite was injured “very seriously” in the lower abdomen according to medical staff, who confirmed that the matador, who hails from one of Spain’s most famous bullfighting dynasties, might never fight again.

The incident took place during the first day of the Fería de Albahaca, a bullfighting festival that welcomes some of the biggest names on the bullfighting circuit to the city’s bullring between August 10th – 14th.

As Rivera Ordóñez – known to Spaniards as “Fran” – was passing his cape, the bull charged, “defeating him during one of the moves,” José Cutiño, the bullfighter’s agent, told El Mundo. The bull took hold during several seconds which seemed to “go on forever”.

The incident, for many Spaniards, brought back the memory of the death of Rivera Ordóñez’s father, the great bullfighter Paquirri, who was gored to death during a bullfight in Pozoblanco, Córdoba, in 1984, aged just 36.

Rivera Ordóñez (right) and his father (left) who was gored to death in 1984.

Francisco Rivera Ordóñez comes from a long line of bullfighters. His great-grandfather was Cayetano Ordóñez – El Nino de la Palma – while his grandfather and great uncle were also famous toreros.

Following Monday’s accident, Rivera Ordóñez was taken to the bull ring’s infirmary where he was operated on for over two hours before spending the night in the intensive care unit of the San Jorge de Huesca clinic in the city.

Cutiño told El Mundo that the goring had not touched “any vital organs” and was “a clean wound”.

After undergoing hours of surgery, medical staff released a statement at around 11pm on Monday evening confirming that the bullfighter was “wounded by a bull horn in the pubic region”.

The horn made a 25cm incision and tore muscles in the abdominal wall and lower stomach, including the colon: “a very serious injury which could prevent him from bullfighting in the future” the medical team confirmed.